009 was the code-name of an unnamed fictional intelligence operative of the Double-O Section, an ultra-covert unit within the Secret Intelligence Service (SIS/MI6). Portrayed by actor and stunt performer Andy Bradford, the character appeared in EON Productions' 1983 James Bond film, Octopussy.

009 is an unnamed operative of the British Secret Service, who, like all 00 Agents, possesses a discretionary 'Licence to Kill' in the field. He is shown at the beginning of the film in East Berlin disguised as a clown and fleeing with a fake Fabergé egg he stole from Octopussy's circus. The theft has not gone unnoticed and he is pursued by knife-throwing twins Mischka and Grischka, who wound him as he attempts to pass through the surrounding forest.

Attempting to escape across a bridge, he is struck by one of the twin's knives and plunges into the river. Assuming him to be dead, the twins break off their pursuit, allowing a fatally wounded 009 to scramble from the riverbank and get to the British ambassador's residence. Smashing through the window, the operative collapses to the floor dead; the egg slipping from his hand and landing at the ambassador's feet. James Bond replaces him, continuing the investigation (Operation Trove) and avenging 009 by killing his murderers. 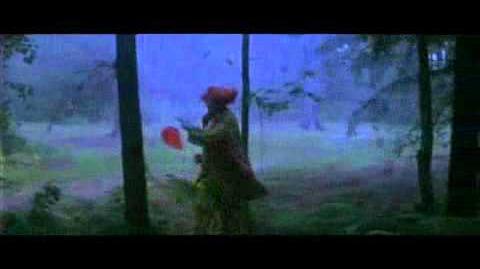 009 Octopussy - Clown chase scene
009 is chased by Mischka and Grischka in Octopussy.

A photograph of 009's corpse was included in the Operation Trove dossier.