The ATAC (an acronym of or Automatic Targeting Attack Communicator) is a device used by the Ministry of Defence to communicate and co-ordinate the Royal Navy's fleet of Polaris submarines. The equipment appeared in the 1981 James Bond film For Your Eyes Only along with its comic adaptation by Marvel Comics.

At the beginning of For Your Eyes Only, the British spy ship St. Georges is stationed in the Ionian Sea, trawling off the coast of Albania. In the lower hull of the boat is a sealed control room containing the Automatic Targeting Attack Communicator (ATAC), a system used by the Ministry of Defence to communicate with and co-ordinate the Royal Navy's fleet of Polaris submarines. While the ship's decoy fishing crew hauls in a net, they accidentally bring with it an old anti-warship mine which explodes, sinking the vessel and drowning the crew before they can trigger the ATAC's self-destruct mechanism. A hunt for the St. Georges and the ATAC ensues, with the British Secret Service dispatching underwater archaeologist, Timothy Havelock to find the ship. Meanwhile, their Cold War rivals, the Soviet Union's KGB contact Aris Kristatos, who it is implied sank the St. Georges, to acquire the transmitter. After Kristatos has Havelock assassinated by a hitman, the British send James Bond to investigate.

Bond accidentally makes contact with Havelock's vengeful daughter, Melina, and travels to the Havelock's yacht where the dead man's journal suggests he had been diving in an unusual underwater location. The pair travel there in her father's mini-submarine and find the St. Georges. The enter the wreck and discover that the ATAC's explosive charge had been armed, but failed to be detonated by the crew. As Bond disarms the charge and extracts the transmitter from its housing, the pair are attacked by one of Kristatos' men in a JIM suit. After a struggle, 007 manages to escape and kill the diver by attaching the magnetic thermite charge to the JIM suit, arming the timing mechanism, which subsequently detonates. The pair flee the sunken ship with the ATAC transmitter and return to the surface. They are promptly ambushed. Kristatos steals the ATAC and makes a failed attempt to kill the pair by trawling them through the water as shark bait. The Soviet spy arranges a handover of the equipment at St. Cyril's Monastery, but is foiled by the combined efforts of Bond, Melina, and Milos Columbo. 007 retrieves the ATAC from Kristatos and as General Gogol arrives to take posession of it, the British spy hurls it over the side of the cliff - destroying it completely.

For the 1981 film For Your Eyes Only production designer Peter Lamont was tasked with creating the ATAC handheld computer. While rudimentary personal computers existed in the early 1980s, laptops did not, and the film's script required a device which was small enough for 007 to throw from the side of a cliff in the film's conclusion.[1] Having designed the prop, it was subsequently built by Don Fagan.[1]

The ATAC with its operator. 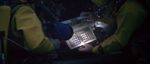 Bond and Marina recover the ATAC from the sunken vessel.

The ATAC is destroyed after being chucked off the cliff by Bond.