Adrian Malprave was the fictional owner and CEO of Malprave Industries, a multinational conglomerate based in Switzerland. She appeared as the main antagonist of Electronic Arts' 2001 video-game Agent Under Fire, voiced by Corina Harmon (credited as Corine Harmin).

Starting with a small shipping concern twenty-five years prior to the events of Agent Under Fire, Adrian Malprave developed her company into one of the world's largest and broadest multi-national corporations; actively involved in oil, shipping and emerging fields such as bio-technology. Only recently coming to the attention of MI6, Malprave had been photographed with known underworld figures such as mercenary Carla the Jackal, and an investigation revealed that some of her connected subsidiaries had no apparent corporate function or income at all.[1] Obsessed with genetic engineering, Malprave uses several of her companies as a front for human cloning. Obtaining blood samples from eight prominent world leaders, she devises a scheme to kidnap and replace them with with identical clones during a G8 summit in the Mediterranean held aboard the British aircraft carrier, HMS Excalibur.

However, her plans are complicated by the resignation of one of her scientific minds, Dr. Natalya Damescu, who seeks out protection at the British embassy in Bucharest, Romania. In a bid to kidnap Damescu, Malprave has British diplomat Reginald Griffin replaced by a clone. Unable to remove the body from the Embassy, the clone zelously guards the locked room, which inadvertently draws the attention of MI6. The kidnapping is frustrated by the intervention of James Bond, who follows a trail of genetic samples - including that of Griffin - to the Embassy. Posing as a lost security guard, he accidentally encounters Malprave in Griffin's bedroom and pockets a nearby security card before she escorts him out. Unlocking the office, 007 finds Griffin dead and is held at gunpoint by the Griffin Clone. After overcoming him, Bond accesses Grffin's computer and finds a message from Malprave's underling, Nigel Bloch, ordering the clone to bring their defective merchandise (i.e. Damescu) to the Malprave Industries HQ, in Switzerland. Bond heads to Switzerland, where he attempts to interview Malprave as journalist 'Mr. Somerset'. However, he is informed that his interview has been delayed and is urged to wait in the CEO's office by her (presumably cloned) assistants Bella & Bebe. It is there that he recognises Malprave from a stained glass window and realises that his cover has been blown. Attempting to kill him, Malprave promptly sets her security on the spy during his escape from the facility.

Continuing her plan to deal with Dr. Damescu, Malprave orders her associate Carla the Jackal to lead a raid on the Romanian embassy before the scientist can trade information about her Poseidon cloning facility to Bond and MI6. 007 inevitably foils the attempt on Damescu's life, procures the information and destroys the Poseidon facility. Teaming up with CIA agent Zoe Nightshade (whom Malprave had intended to replace with a clone, infiltrating the CIA), Bond heads to the Mediterranean G8 summit and, while unable to prevent Malprave's men from kidnapping the world leaders, he foils her attempt to replace them by destroying a helicopter transporting the replicas. Held under heavy guard at her headquarters in the Swiss Alps, 007 infiltrates the facility and frees the heads of government. In revenge, Malprave sets the base to self-destruct. After a firefight with Nigel Bloch, Bond follows him into Malprave's main office and shoots him with a rocket launcher, sending him crashing through the stained-glass window to his death. Just as Bond manages to leap free of the base before it explodes, Malprave appears and tries to jump clear too, but is consumed by the blast and dies. Bond lands on a military aircraft being commandeered by Zoe, and together they escape the smouldering base. 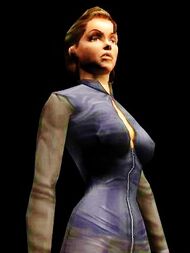 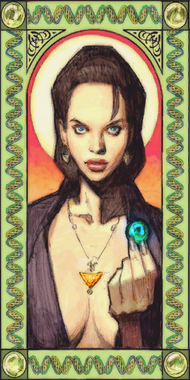 Retrieved from "https://jamesbond.fandom.com/wiki/Adrian_Malprave?oldid=80923"
Community content is available under CC-BY-SA unless otherwise noted.