James Bond 007 in... Agent Under Fire[1] is a first-person shooter video game published by Electronic Arts for GameCube, PlayStation 2, and Xbox. It is the fourth James Bond game which is not based on a James Bond film or book. The game's story arc continues in the following sequel, Nightfire, released a year later. Unlike previous Bond games which featured the likeness of then current Bond actor Pierce Brosnan, Agent Under Fire used the voice and likeness of English actor Andrew Bicknell for Bond.

CIA agent Zoe Nightshade, a mole in the Hong Kong based Identicon Corporation, is discovered and captured. Identicon, a botanical research firm, is a possible front for a weapons-smuggling ring. James Bond infiltrates the facility in an attempt to rescue her, as well as retrieve a suspicious courier case in the same building. After freeing Nightshade from a submarine set to launch, the pair flee the facility with the courier case. Nigel Bloch, the head of Identicon, has his forces chase the agents through the streets of Hong Kong. The two steal a second case of vials from a nearby Identicon factory. They then rendezvous with R, who provides Bond with a gadget-laden BMW Z8. A limousine pulls up, as an assassin inside launches a rocket at the agents, killing Zoe, and steals the case. Bond gives chase, stopping an armored van which contained the stolen vials.

The vials contain nine blood samples, eight of which contained blood of world leaders. One contains the blood of British diplomat Reginald Griffin, serving in Romania, who is obsessed with protecting a room, outside of his jurisdiction, in the embassy. Bond investigates the embassy, finding Griffin dead, before a similar-looking man attacks him. After overcoming him, Bond finds a message from Bloch on Griffin's computer that mentions Malprave Industries, based in Switzerland. Bond takes the information from the computer and escapes.

At Malprave Industries, Bond, posing as a journalist, sees that the CEO is a woman he met at the embassy, Adrian Malprave. After collecting evidence, he makes his escape from the facility. Analysis of the computer message from Romania mentions "Damaged Goods," believed to be a codename for Dr. Natalya Damescu, formerly in the employ of Malprave, now under protection at the British embassy in Romania. She also has inside information to offer. Carla the Jackal, an infamous terrorist who also killed Zoe, leads a raid on the embassy. Bond fights the terrorists before running into Damescu. After a confrontation with the Jackal, Bond picks up a data chip on something known as Poseidon, and delivers it to R for analysis.

The chip leads Bond to an oil rig in the South China Sea. After running into Bloch, Bond follows him into Poseidon, an underwater base devoted to clone development. After destroying the lab, he climbs onto a submarine bound for a Royal Navy aircraft carrier. On the submarine, Bond finds Zoe, who reveals that the woman he "saved" from the Identicon facility was a clone meant to infiltrate the CIA, and that the Jackal intended to kill Bond.

Depending on whether or not the player picked up the verification code, Bond and Zoe are either captured or are taken to the carrier unharmed. In either case, the pair investigate the ship. It is discovered that 8 world leaders have been cloned, and are to be replaced by the clones. Bond destroys the craft carrying the clones, and the pair make their escape. They arrive at Malprave's base in the Swiss Alps, where Bond saves the eight world leaders. Before he can escape the base, however, he encounters Malprave, who has set the base to self-destruct. She reveals Bloch is still alive, and that Bond had killed his clone. After an encounter with him, Bond follows him into the main office and kills him. He manages to escape the base before it explodes, taking Malprave with it.

Starting with GoldenEye 007 and continuing on with The World Is Not Enough, multiplayer support in a James Bond game has become a staple. The multiplayer mode in Agent Under Fire features up to 4 players, with the option for AI bots in the Xbox and GameCube versions.

Agent Under Fire features over fifteen different types of firearms as well as other weapons. Each firearm is based on a real firearm, but is given a pseudonym, the same manner as the weapons in GoldenEye 64, and The World is Not Enough. Most of the gadgets are concealed in a mobile phone, including a decryptor, grapple, laser, and remote transmitter. Bond is also provided with a card that disrupts electronic signals, as well as a jetpack.

Agent Under Fire originally started as the PS2 and PC versions of The World Is Not Enough, and was based on a modified Quake III Arena engine. In 2001, the PC version was cancelled, and the PS2 version was remade as Agent Under Fire.[2][3] The game was intended to be one of the first titles to be available for the next-gen console, and after a series of promising screenshots & adverts were released to the public, the video-game was eagerly anticipated by Bond fans and game enthusiasts alike. Nevertheless, despite a seemingly excellent production flow, several cutbacks and rearrangements at EA resulted in numerous members of the game's development staff being laid off.[3] In early 2001, production of the game was suspended and its spring 2001 release date was delayed. After speculation that the game wouldn't meet sales expectations due to the fact that almost two years had passed since the film's debut and interest had declined, the game was officially scrapped.[3]

Once all troubles at EA had settled down, a new development team was put together and production of an altogether new game quickly began, creating a new story, new characters, and modifying the unfinished The World Is Not Enough engine for the new title. Though the PC and PlayStation versions of The World Is Not Enough were ultimately cancelled, many assets from these games made their way into the finished version of Agent Under Fire:

In addition to borrowing assets from The World Is Not Enough, the game was heavily influenced by 1997's GoldenEye 007. EA stated in several gaming magazines that Bond would be going "back to its roots," as the game was originally designed to be a true successor to Rare's iconic 1997 video-game. Notably, early promotional screenshots of the game reflected this, featuring the renowned GoldenEye 007 health-bar.

Before going further in development, the studios' original plan was to bring Roger Moore to reprise his role as Bond.[4] In the end, however, the behaviours between Moore's interpretation of the character and the one in this game shared identical attitudes. Andrew Bicknell provided the voice and likeness of Bond for the game. However, his casting was not widely reported, and many PS2 magazines released at the time, such as PlayStation World erroneously reported that Bicknell's Bond was an original generic character invented for the game. Similarly, originally John Cleese was to reprise his role as "R" from The World Is Not Enough. Cleese had previously played R in the PS1 and N64 versions of The World Is Not Enough and 007 Racing, and production footage of the game released clearly showed Cleese's likeness and voice. However, due to copyright reasons, Cleese's likeness was replaced and his lines redubbed by Miles Anderson, who had imitated the voice of Desmond Llewelyn's Q in previous games.[5] Cleese did however reprise his role as R in commercials for Agent Under Fire.[6]

The Cincinnati Enquirer gave the PlayStation 2 version three-and-a-half stars out of five and called it "Slick, sexy and jam-packed with action — but this adventure is short with limited playability over time, except perhaps for its multiplayer modes."[13] However, it later gave the other two versions a score of four stars out of five.[14] FHM gave the PS2 version three stars out of five, stating, "There is the usual mix of chick[s], cars and guns to keep even the most special of agents happy."[15] Maxim also gave the PS2 version six out of ten and stated that "At last you’ll infiltrate the secret lair, where you’ll discover…you’ve been playing a very standard-issue game."[16] 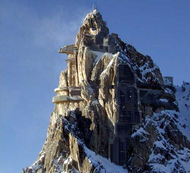