Alexander Mayhew was a fictional property manager employed by nuclear decommissioning company Phoenix International. The character appeared in the 2002 James Bond video-game 007: Nightfire and was voiced by Ian Abercrombie.

The man in charge of the Phoenix International properties in Japan, Mayhew is first seen at a party in industrialist Rafael Drake's Austrian castle; in reality a cover for the exchange of a missile guidance chip between Drake and Mayhew, which had been stolen from the United States. Infiltrating the party, James Bond makes his way to the exchange and steals the chip, smuggling it out of Austria. After the breach, Drake threatens to kill Mayhew, should the operation fail. Mayhew contacts the Secret Intelligence Service (SIS/MI6), saying he will provide vital information if Bond comes to his rescue. At his Japanese estate, Mayhew is attacked by Drake's men, consisting of Japanese thugs. Bond fights his way through the estate and manages to obtain a file from Mayhew's safe. As they are prepared to make an escape from the estate, Mayhew is stabbed in the back by an assassin. The file leads Bond to Mayhew's office at the Phoenix Building in Tokyo. 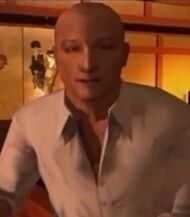 Mayhew meets Bond.
Add a photo to this gallery
Retrieved from "https://jamesbond.fandom.com/wiki/Alexander_Mayhew?oldid=93606"
Community content is available under CC-BY-SA unless otherwise noted.