1963, onboard the Orient Express

Kerim Bey: "[translating] The women will fight until one of them is dead or surrenders. The winner will marry the man they both love, the loser will be cast out of the tribe, never to return. If both quit, the elders of the tribe will then decide who will marry the chief's son"
Kerim Bey: "She's saying that..."
James Bond: "Yes, I think I got it without the subtitles."
―Kerim Bey and James Bond[src]

Ali Kerim Bey was Head of the British Secret Service's "Station T" in Istanbul and the deuteragonist of the 1963 James Bond film From Russia with Love. Portrayed by the late actor Pedro Armendariz, Kerim Bey was based on the character Darko Kerim from Ian Fleming's 1957 novel From Russia with Love. He would later appear with Armendariz' likeness and voiced by JB Blanc in Electronic Arts' 2005 video game adaptation of the film. The character would later be completely re-imagined for the 2015 mobile game James Bond: World of Espionage.

Kerim Bey was born in Trebizond, in north-eastern Turkey. His mother was an English governess and his father was a Turkish fisherman, famous for catching sword-fish. He was a ladies man, and so he had a large family with 15 children. The children lived a gypsy life-style and constantly argued. They lived almost on top of each other in a small, old ruin of a house. His father was strict and beat the kids if they were bad, to keep the family together.

When Kerim was 20, he got a boat of his own and made his money fishing, following in his father's footsteps. His father knew an Englishman who he sold information to, and Kerim went to work for him. The man turned out to be the Head of Station T, a Turkish intelligence branch that collaborates with MI6 and Kerim took over his position when he died. Before he got the position, Kerim had infiltrated a traveling circus, working as a strongman and wrestler. He had spied on the Russians, pretending he didn't know the language.

Tatiana Romanova had contacted him, saying that she wanted to defect to England. She had apparently seen a file photo of James Bond, and had taken a fancy to him. She said that she would hand over a Lektor decoding machine to Bond if he would go to Istanbul and take her and the machine back to England.

Kerim contacted M, who sent Bond out to meet him in Istanbul. Kerim sent a chauffeur to meet Bond at the airport, taking him back to Kerim's office to discuss the mission. Kerim said he smelt that something was fishy and that he didn't believe the girl. Bond went to rest at his hotel, and Kerim went to work at his desk. One of his 'girls' enticed him over to the sofa, and he narrowly missed an explosion caused by a limpet mine on the wall outside.

Kerim decided to spy on the Russians. He led Bond through a hidden door and down some steps into an underground reservoir that had been built by the Emperor Constantine around 350AD. They took a small boat down to a tunnel and walked through into a small cavity beneath the Russian Consulate building. Kerim had received a periscope from the British Navy, and had closed the Consulate to install it, claiming that the traffic was shaking the foundations. He spies a Military Intelligence meeting where there is the general Vassili, Koslovski, Commissar Benz and Krilencu, an assassin and a old enemy of Kerim.

Kerim decided to visit his friend Vavra to get some information about Krilencu. Bey went to Vavra's gypsy camp with Bond, but the evening didn't turn out as he had planned. Vida and Zora, two girls were in love with the same man and were to fight to the death. They were allowed to stay for the fight, and were given food and raki. The two girls had nearly killed each other when Krilencu and his men attacked the camp, injuring Kerim and nearly killing him. Kerim survives and says that he must kill him even after getting shot in the arm. Kerim decided to take immediate revenge, and he took Bond to Krilencu's street.

His plan was to get his sons to dress up as two policemen and ring the doorbell, causing Krilencu to escape out of his trapdoor around the back. Kerim was ready with Bond's sniper rifle, and he shot him dead, paying off many longstanding debts.

He then assisted Bond in stealing the Lektor, by setting off a bomb under the Russian Consulate. He escaped undetected with Bond and Tatiana Romanova, and boarded the Orient Express train. Kerim planned their escape back to England and took captive the commissar Benz who had boarded the train to spy on them. Kerim and Bond captures Benz and Kerim stay with his prisoner but is stabbed to his death by SPECTRE Operative Red Grant on the train, who made it look like Kerim and his prisoner, Benz had killed each other.

Kerim had an almost identical personality to Bond, which made Kerim an ally and a loyal friend. His interests and defects included an attraction for beautiful women, as well as smoking and drinking. Like Bond, he had the facility to humor from a situation, and also took his job very seriously, as has been shown, even if he is injured, he will continue to fight for the mission. 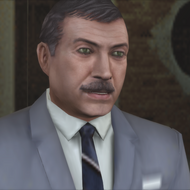 Kerim in the Video game adaptation

In the Gyspy camp

Kerim's death
Add a photo to this gallery

Retrieved from "https://jamesbond.fandom.com/wiki/Ali_Kerim_Bey?oldid=85065"
Community content is available under CC-BY-SA unless otherwise noted.