The Amazonian launch complex was a fictional covert space-shuttle launch site constructed by billionaire industrialist, Hugo Drax, and was concealed among the ruins of an extinct ancient civilization near the River Tapirapé, in north-central Brazil. The facility appeared prominently in the 1979 James Bond film, Moonraker. The iconic location would later be inspiration for a level in the 1997 video-game, Goldeneye 007, and would be re-imagined as a private space-tourism port for the 2012 game, 007 Legends.

The secret Moonraker launch complex is constructed under and around the ruins of an extinct Mesoamerican civilization, rendered infertile by long-term exposure to the pollen of the Orchidae Nigra (or 'black orchid'). The orchid continues to grow among the ancient stone structures and has been weaponized into a nerve agent by Drax's scientists as part of his scheme to wipe out humanity and repopulate the Earth with his 'master race'.

James Bond stumbles upon the launch site whilst searching for the source of the orchid toxin and is lured by one of Drax's girls into an ancient pyramid structure. In an idyllic garden cavern he is tossed into a pool of water by a hidden mechanism, and is forced to kill a large constricting snake to escape the death trap. He is dragged from the water by Jaws and is brought to an angular Launch Control Center lined with monitors. There he witnesses the launch of the shuttles and Drax reveals his plans. Bond and his CIA contact, Dr. Holly Goodhead, are then left to die in a flame exhaust pit under Moonraker #5 and narrowly escape by blowing apart a vent cover. The pair disguise themselves as pilots and escape the complex by riding on Moonraker #6.

In the video game GoldenEye a similar complex appeared in the bonus level titled "Aztec" (playable after completing 18 missions in Secret Agent difficulty). The official strategy guide notes that following the events of Moonraker, fragments of the Drax Corporation are still involved in small, unlicensed space exploration and military research.[1] The South American site 007 is sent to penetrate is said to be 'close to the original Drax complex' in Teotihuaca'n[1]. Notably, the real-life Teotihuacan ruins are located in Mexico. The briefing states that the Drax Corporation are scheduled to launch a stolen Moonraker shuttle with an unknown military payload and 007 is dispatched to reprogram its guidance system.

Known for its reputation as one of the hardest levels in the game, featured enemies include hidden drone guns and an infinite number of re-spawning Moonraker Elites armed with US AR33 rifles, Moonraker laser rifles and grenades. Jaws appears in this level as an enemy, dual wielding AR33 rifles. After defeating Jaws and pocketing his key-card, Bond must enter the computer room, reprogram the guidance system and launch the shuttle in the hangar to complete the mission. 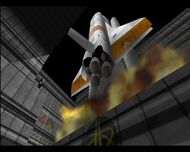 Chemical weapon laboratory with toxin globes, as seen in 007 Legends (2012).

Data sphere, with mainframe containing crew manifests. As seen in 007 Legends (2012).
Add a photo to this gallery 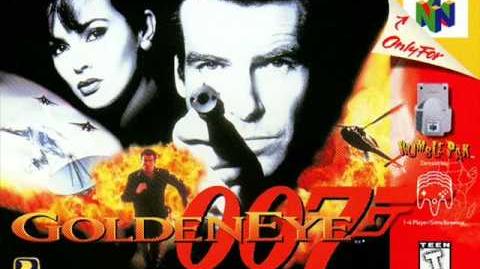 Goldeneye 007 (Music) - Aztec
Add a photo to this gallery

Retrieved from "https://jamesbond.fandom.com/wiki/Amazonian_launch_complex?oldid=92630"
Community content is available under CC-BY-SA unless otherwise noted.