James Bond Wiki
Register
Don't have an account?
Sign In
Advertisement
in: James Bond characters, Film characters, The Spy Who Loved Me characters,
and 15 more
English

Bond: "Which bullet has my name on it? The first or the last?"
Anya: "I have never failed on a mission, Commander. Any mission."
Bond: "In that case, Major, one of us is bound to end up gravely disappointed, because neither have I."
―James Bond and Anya Amasova[src]

When the British HMS Ranger and the Soviet submarine Potemkin are captured, M recalls James Bond from a mission where he is currently in a cabin located in Austria. While leaving Bond is ambushed by a Russian team lead by Sergei Barsov, but is able to kill Barsov in self-defence prior to parachuting off the mountain, unbeknownst that the agent was Amasova's lover. Later, Anya has also been recalled from a mission by General Gogol of the KGB.

Anya meets Bond during a show at the Pyramids in Egypt, where her thugs fight with Bond when she believes he has killed Aziz Fekkesh, an Egyptian contact whose body has been found in one of the pyramids. The real killer was Jaws.

However, they become formally introduced to one another in Cairo when they both arrive at Max Kalba's club. After spouting various biographical details to each other (for example, Anya is aware of Bond's doomed marriage), they attempt to outbid one another for a secret microfilm. When Kalba is killed by Jaws, they travel across Egypt tracking the microfilm. After Anya ultimately outwits Bond for the microfilm (but Bond had reviewed it), they report to the Abu Simbel temple where Gogol and M have decided to work together to find out how and why their submarines are being stolen while at sea.

For most of the film, Bond and Anya have the same mission objectives and try to achieve the same goals often by attempting to outdo one another, during which they fall in love. While travelling to Sardinia by train they share a meal together and while Anya is preparing for bed in her carriage, having politely declined Bond's offer of a nightcap, she is attacked by Jaws. Bond hears the sounds of a struggle over the noise of the train and arrives just in time to save her from being killed. After a brief fight, Jaws is dispatched out of a window and Bond returns to Anya, who tends to a cut on his shoulder before they kiss and ultimately spend the night together. On Sardinia, Anya accompanies Bond to meet Karl Stromberg posing as his wife. Afterwards, Anya learns that Bond killed her lover. She then tells him that she will ultimately have revenge once their mission is complete.

Anya is later captured by Stromberg and held captive at Atlantis, Stromberg's undersea base. Bond sneaks aboard and rescues her. As the mission reaches its end, she points her gun at Bond, only to discover that she is too in love with him to kill him.

Anya (pointing gun at Bond), tells him: "The mission is over, Commander". At that moment, as Anya is tightening her finger on the trigger, the cork pops off of a champagne bottle that Bond is in the process of opening. Anya smiles, stifling a giggle, and Bond says "In my country, Major, the condemned man is usually allowed a final request" to which she says "Granted". Bond then suggests that they get out of their wet clothes.

When James and Anya's escape pod goes into the ship Bond saved from Stromberg's 'instruments of Armageddon', Q, M, Fredrick Gray and Anya's superiors from Russia look inside the window at James and Anya making love in the luxury bed in awe. "James!" Anya says as she's the first one in the pod to see the duo's superiors.

Anya was depicted as cunning, devious, aloof and fearless. She was vengeful and became tenacious to kill James Bond after he killed her boyfriend. However, despite this, unfortunately for Sergei, she is also capable of forgiveness and letting go of these grudges as she has shown to have forgiven Bond after she realized Bond actually killed Sergei in self-defence. She is shown to have nerves of steel, since she was completely calm in holding Jaws at gunpoint.

She also shows signs of a sense of humour, as when she meets Q, she calls him "Major Boothroyd", to show she knows who he is.

Barbara Bach was cast only four days before principal photography began, and performed her audition expecting just a supporting role in the film.

It was planned to have Amasova make a cameo in Moonraker (which was released in 1979), as the woman in bed with General Gogol, but this never happened.

Joshua Rich of Entertainment Weekly listed Amasova as the fifth best Bond girl according to their PopWatch readers, describing her as "Equally at home fighting in the Sahara as rolling in the sheets, she was the Bond-girl response to women’s liberation, in every respect 007’s first modern equal".[1] Kim Morgan of Fandango lists her among the top 10 Bond Girls.[2] Allwomenstalk named her as the fourth sexiest Bond girl.[3] About.com ranked Amasova as number seven in their list of best Bond girls.[4] Bond-Girls.net called Amasova "one of the sexiest and most beautiful Bond-Girls...a brand-new type of Bond-Girl".[5] 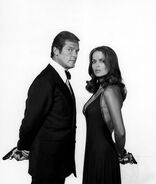