Deceased, stabbed in the back by Milos Columbo

"But I must warn you, stopping Columbo will be difficult. He has important connections. You cannot just arrest him. Find some different way. You may have to kill him. Does this discourage you?"
― Kristatos attempting to manipulate James Bond into hunting down Milos Columbo.[src]

Aristotle "Aris" Kristatos (In Greek: Αριστοτέλης Κριστάτος) was a fictional Greek heroin smuggler, intelligence operative and rival of Milos Columbo. He was hired by KGB to obtain the ATAC device. Based on Kristatos from Ian Fleming's short story "Risico", he was the hidden main antagonist in EON Productions' 1981 James Bond film For Your Eyes Only, portrayed by British actor Julian Glover and also appeared in the comic adaptation by Marvel Comics.

Aris Kristatos comes from the island of Kefalonia. Generally regarded as a hero for his bravery in World War II and the Greek Civil War, which the British government awarded him the King's Medal, Kristatos was actually a double agent during both conflicts. Though he appeared to be a respectable businessman in the years thereafter, he was in fact a heroin smuggler and a Soviet agent. At one point he worked with another smuggler, Milos Columbo, whom the latter remarked "then, we were like brothers". However, as time passed the two smugglers came to argue about what was to be smuggled. Columbo had smuggled commodites such as oil and almonds as they were in high demand and he believed ordinary people were hurt by the crushing tariffs of EU nations, and was later appalled when he discovered Kristatos was involved in heroin and white slavery. He is in union with rogue Nazi supporters who have aided him in smuggling gold, drugs and other supplies out of Britain. In the film, he is hired by General Anatol Alexis Gogol to obtain the British device ATAC (Automatic Targeting Attack Communicator); a device which controls and co-ordinates Britain's nuclear submarine fleet.

While operating in the Ionian Sea, the British spy ship St. Georges is sunk by an old mine hauled up in its fishing nets. The ship was equipped with ATAC. As the waters were too shallow to cover the wreck, the British government ruled out an official salvaging operation. Marine archaeologist, Sir Timothy Havelock, is hired by the British Secret Service to locate the wreck of the St. Georges. In a bid to steal the ATAC and deliver it to the Soviets, Kristatos has Havelock murdered by Cuban hitman Hector Gonzales; attracting the attention of James Bond and Havelock's vengeful daughter Melina.

Sent to Cortina on his search for his henchman Emile Locque, Bond meets with Italian MI6 agent Luigi Ferrara. The man tells him that he set up a meeting with Kristatos, who could possibly help them.

Bond meets Kristatos at the olympic ice rink, as well as his niece Bibi Dahl, a young iceskating champion who is tipped to be a future Olympic gold medalist. Kristatos introduces them to Bibi and her trainer Jacoba Brink. Bibi then asks Kristatos whether Bond can accompany her skiing later, and Kristatos persuades Bond, telling him that he would feel better knowing that someone was with her. After Bibi has left, Bond hands Kristatos a picture of Locque and asks whether Kristatos knows the man. Kristatos identifies him as Locque and tells Bond and Ferrara that he is the right-hand man of Milos Columbo. Kristatos tells the both agents about his and Columbo's past, stating that they were once close as brothers. He also tells them that Columbo's alias is The Dove. When Bond and Ferrara take their leave, he fails to shake Ferrara's hand, deeming the man too unimportant.

While Bond is skiing with Bibi, he is watched by Locque and Kristatos' other henchman Erich Kriegler, who are waiting for an opportunity to kill Bond. Though Bond eventually separates from Bibi, his men are unable to kill the agent. Kristatos eventually has Ferrara killed by Locque, and, by leaving a dove pin on the body, makes it seem like it was Columbo's work.

Bond meets Kristatos again at a casino in Greece. There, he tells Bond that he has been thinking about why Bond wanted to know about Locque. Knowing that Locque works for Columbo, who is a heroin smuggler, Kristatos tells Bond that he has deduced that Bond is from the British Narcotics Board and Bond leaves him in this fallacy. Sensing the opportunity to get rid off his opponent, Kristatos tells Bond that he might have to kill Columbo to stop him. Pointing at a different table, he shows Bond Columbo, who is been sitting there with his mistress Lisl von Schlaf. Unbeknownst to both of them, their coversation is by Columbo.

When Columbo seemingly insults his mistress, causing her to make a scene and leave the club, Bond tells Kristatos that this might be an opportunity to get information. Kristatos responds that it might be a trap, secretly worried that Columbo might have staged it to make contact with Bond. When Bond insists to follow Lisl, Kristatos tells him to take his car. However, once Bond is gone he calls Locque and tells him to kill both.

Revealed as a villain

"You have shot your last bolt, Miss Havelock!
[to a henchman] Oh, leave the legs free. They'll make appetizing bait."
― Kristatos oversees preparations for the keel-hauling.[src]

While being attacked by Locque and his henchman Claus, Bond is saved by Columbo's men, who kill everyone except Locque, who escapes. Columbo's henchmen then bring Bond to Columbo, who reveals that Kristatos lied to him. All Kristatos said about Columbo was actually about himself - Locque works for him, he is working for the Russians and he is the one to smuggle heroin. To prove that he tells the truth, Columbo proposes that they break into Kristatos' warehouse at Albania at night, the warehouse where he is storing his heroin. There, Columbo is proven right. During the ambush, the warehouse is blown up and Locque is killed by Bond.

When Bond, who with Melina's help has found the wreckage of the ship containing the ATAC, dives down there to get the ATAC, a silent alarm is triggered that tells Kristatos that there are intruders down at the ship. He sends a henchman in a special diving suit, which can be used even in high pressure, who attacks Bond while Bond defuses the mechanism that would lead to the ATAC's destruction. However, Bond is able to defeat him and blows him up with the explosive that was previously rigged to the ATAC. When Bond and Melina get back to the surface, they find that Kristatos and his henchman have taken over their ship. Kristatos thanks them for disarming the device. When Bond tells him that the MI6 will double whatever the Russians are paying him, Kristatos tells him that he never goes back on a deal, as this would hurt his reputation. Kriegler then tells Kristatos that he will deliver the ATAC to the KGB and return with the money, but Kristatos states that their deal was that he would turn the ATAC over at a location of his chosing. He tells Kriegler that he will deliver it to the KGB at St. Cyrils, a clifftop monastery. To get rid of Bond and Melina, he ties them together and binds them to the rear of his yacht, dragging them behind through the water, planning for them to get eaten by the sharks or impaled on the corals. However, Bond and Melina dive down and bind tie the rope around a rock, eventually severing it. Realizing that Bond got free, Kristatos tells the captain to turn the ship around to run them down. To evade death, Melina and Bond dive down to a site where Melina dived earlier and use the air canister she left there to stay underwater long enough to make Kristatos believe that they died.

Exchange at St. Cyrils and Death

To find out where this St. Cyrils, of which Kristatos spoke earlier, is located, Bond meets with Columbo, which is a remote monastery on a high clifftop at Greece. Awaiting the arrival of General Gogol, Kristatos is furious when he realises that his niece, Bibi, seems to have grown to despise him. Thinking that Jacoba Brink turned her against him, he tells Brink that he will deal with her as he deals with everyone who betrays him, before storming out of the room. Planning a bigger future, Bibi and Brink plan their escape, but Kristatos finds out. While she tries to get out, Brink stumbles upon Bond, Columbo and his men, who have arrived at the monastery to get the ATAC back. Ultimatly betraying Kristatos for Bibi, she leads the intruders to the guard chambers, where they overpower Kristatos' men, and tells them where Kristatos is.

Meanwhile, Bibi demands from Kristatos to know where Brink is, believing that Kristatos has harmed or killed her. Fed up with the behaviour of his niece, he hits her. Hearing the arriving helicopter of General Gogol prevents him from harming her further. However, before the helicopter lands, Bond, who has been in a fistfight with one of Kristatos' men, falls through the window into the main room, causing Kristatos to realise that he did survive. While Bond engages in a fight with Kriegler, Kristatos takes the attack and flees outside, to hand it over to Gogol. Kristatos rushes towards the helicopter, but is attacked by Columbo. While on the ground, Kristatos drops the ATAC and tries to reach it, but Bond picks it up before him. Melina then arrives, aiming her crossbow at him but Bond talks her out of killing the defenseless man. While Bond talks to her, Kristatos draws a knife planning to kill Bond but Columbo lunges his own knife into Kristatos' back, killing him.

Despite his status as a seemingly heroic war hero and a distinguished, refined and cultured billionaire, Aris Kristatos is in fact an unscrupulous businessman who uses his respectable facade to play off his various enemies against each other in order to ensure that his superiors in the KGB and the Soviet Union have a smooth operation. A resourceful man, his cover allows him to be well received all over the Mediterranean Sea, making his true nature as a devious and manipulative agent even harder to imagine. Kristatos is also elegant and generally has a calm and thoughtful demeanour. However, despite his amoral methods and the nefarious nature of his activities, he seems to be genuinely attached to Bibi even though the girl sometimes feels oppressed by his tutelage and can sometimes rebel against her godfather, as was the case in St. Cyril, and Kristatos vows in return not to let his feet be trodden on. But he is still a ruthless double agent who cares above all about his reputation and the rewards he earns by serving the Soviet Union behind Britain's back.

Julian Glover had been shortlisted as a possible Bond for Live and Let Die, eventually losing out to Moore.[1] Producer Michael G. Wilson stated that "when we first thought of him he was too young, and by the time of For Your Eyes Only he was too old.[2] Glover would go on to appear opposite previous Bond Sean Connery, A View to a Kill actress Alison Doody and The Living Daylights actor John Rhys-Davies in Indiana Jones and the Last Crusade, as Nazi sympathiser Walter Donovan, another seemingly friendly character who is using both the hero and a foreign power to his own ends.[3] 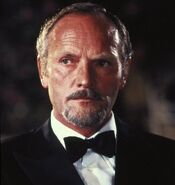 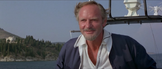 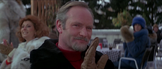 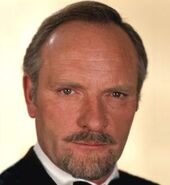