Arkady Yayakov (Аркадий Yayakov) is a fugitive Russian war criminal sought by Interpol in the 2004 James Bond video game Everything or Nothing.

Not much is known about Yayakov, other than he is a war criminal wanted by the international police. At some point in his lifetime, Yayakov lost, and replaced his right hand. Arkaday Yayakov is involved with Nikolai Diavolo, and uses his laboratory to aid him. When Bond destroys his lab Yayakov is killed by falling equipment. Yayakov runs a club in New Orleans known as the Kiss Kiss Club.

While working with Nikolai Diavolo, Yayakov receives word that one of the singers in his night club, Mya Starling, was a double agent. He drags her out of the back entrance and hands her to his associate Jean Le Rouge, whom he gives orders to kill Starling. Eventually, his laboratory is discovered by James Bond in an abandoned plantation in the Louisiana Bayou. Bond destroys much of Yayakov's equipment and causes some to fall and crush Yayakov beneath it. 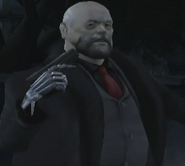 Yayakov as he appeared in the GameBoy Advance adaptation of the 007 video game Everything or Nothing.
Add a photo to this gallery
Retrieved from "https://jamesbond.fandom.com/wiki/Arkady_Yayakov?oldid=90917"
Community content is available under CC-BY-SA unless otherwise noted.