The iconic Aston Martin DB5, released in 1963, is a luxury grand tourer made by British luxury sports cars manufacturer Aston Martin. It was a slight upgrade from the DB4 which preceded it.

The principal differences between the preceding Aston Martin DB4 Series V and the DB5 are: The all-aluminium engine was enlarged from 3.7 L to 4.0 L, A new robust ZF five-speed transmission (except for some of the very first DB5s)[2] and three SU carburettors Producing 282 bhp (210 kW), which propelled the car to 145 mph (233 km/h), this engine, available on the Vantage (high powered) version of the DB4 since March 1962, became the standard Aston Martin power unit with the launch in September 1963 of the DB5.[3] Standard equipment on the DB5 included reclining seats, wool pile carpets, electric windows, twin fuel tanks, chrome wire wheels, oil cooler, magnesium-alloy body built to superleggera patent technique, full leather trim in the cabin and even a fire extinguisher.B All models have two doors and are of a 2+2 configuration. A three-speed Borg-Warner DG automatic transmission was available as welBl. At the beginning, the original four-speed manual (with optional overdrive) was standard fitment, but it was soon dropped in favour of the ZF five-speed.[4] The automatic option was then changed to the Borg-Warner Model 8 shortly before the DB6 replaced the DB5.[3]

The Aston Martin DB5 is the most famous Aston Martin car due to its use by James Bond in Goldfinger (1964). Although Ian Fleming had placed Bond in a DB Mark III in the novel, the DB5 was the company's newest model when the film was being made. The company was initially reluctant, but were finally convinced to a product placement deal. The car used in the film was the original DB5 prototype, with another standard car used for stunts. Two more modified cars were built for publicity tours after the film's release. In January 2006, one of those cars was auctioned for more than $2 million.[5]

Famous for its array of gadgets, the film's script initially had the car armed only with smoke screen. However, the gadgets rapidly increased as crew members began suggesting devices to install in it. For instance, director Guy Hamilton conceived the revolving license plate because he had been getting lots of parking tickets, while his stepson suggested the ejector seat (which he saw on television).[6] Some further changes were made during production; including the replacement of a caltrop-dropping gadget (located behind the rear light cluster) with an oil dispenser because the producers thought the original could be easily copied by viewers.[7] Production designer Ken Adam and engineer John Stears overhauled the prototype Aston Martin DB5 coupe, installing these and other features into the car over six weeks.[8] Only two of the gadgets were not actually installed in the vehicle: the wheel-destroying blades, inspired by Ben-Hur's scythed chariots (entirely made on studio); and the ejector seat. The scene where the DB5 crashes was filmed twice, with the second take being used in the film. The first take, in which the car drives right through the fake wall, can be seen in the film's trailer.[9]

The vehicle was used again in the following film, Thunderball (Reg: BMT 216A), where it was equipped with two rear-facing water cannons for Bond's escape from Bouvar's château. The effect was achieved using two fire hoses mounted under the vehicle, the hose pipes clearly visible in some shots.

After a thirty-year absence from the film series, the Aston Martin DB5 reappeared in 1995's GoldenEye. Sporting a new number-plate (Reg: BMT 214A), the car was fitted with a radio that doubled as a printer and communication device, and a champagne cooler concealed under the centre arm rest. During the film, Bond is accompanied to Monte Carlo by an MI6 psychiatric evaluator, and engages in a race against a Ferrari F355 GTS owned by assassin, Xenia Onatopp. Three different DB5s were used for filming. The BMT 214A also returned in Tomorrow Never Dies (1997), and was set to make a cameo at Castle Thane in The World Is Not Enough (1999). Although the scene was cut, the outline of the Aston Martin can still be seen in the closing scenes of the film; as M and her staff attempt to locate Bond with a thermal-imaging satellite.

Following the series' reboot in 2006, a further DB5 (Reg: 56526) made an appearance in Casino Royale, in which Daniel Craig's Bond wins an Aston Martin in a game of poker against villain, Alex Dimitrios. Unlike the classic British vehicle, it had Bahamian number plates and was left-hand drive, whereas previous versions had been right-hand drive. The left-hand drive DB5 would not make a reappearance during Craig's tenure as Bond. Instead, the classic gadget-filled Aston Martin DB5 (with the original registration BMT 216A) inexplicably returned in 2012's Skyfall.[10]

Attempting to protect M from the vengeful ex-MI6 cyber-terrorist Raoul Silva, 007 swoops by a London warehouse to swap his vulnerable government car for an Aston Martin DB5. The pair travel to Bond's ancestral home, Skyfall Lodge, and use the vehicle's concealed weaponry to stage a defense of the building. The car is subsequently destroyed by heavy machine gun fire - much to Bond's fury. To achieve the effect, replica miniature cars were used and destroyed. 3D printing techniques were used to create models a third of the size of the real DB5.[11] Subsequently, in Spectre, Q attempts to painstakingly reconstruct the DB5 from the wreckage. In the final scene of the film 007 retrieves the restored car and drives off with his new flame, Madeleine Swann. The vehicle (now with the registration "A 4269 00") would return for Craig's final film, No Time to Die, equipped with twin M134 Miniguns behind each of its headlamps.[12] Despite its upgrades, the outline of its ejector hatch indicates it retained some of its old features. Chase sequences involving the DB5 were filmed in southern Italy between late August and September 2019.[13][14] Eight different vehicles were used for filming..[15]

The classic Aston Martin DB5 (Reg: BMT 216A) has also made appearances in the James Bond video-games 007 Racing (2000), Agent Under Fire (2001), From Russia with Love (2005), and Blood Stone (2010). In 007 Racing it appeared in the first level of the game, featuring gadgets from the film Goldfinger. The DB5 promptly returned in 2001's Agent Under Fire, where 007 attempts to locate an incriminating data-chip ejected somewhere in Bucharest. Unlike its movie-counterpart, the Agent Under Fire vehicle was equipped with rockets and guided-missiles. For the video-game adaptation of From Russia with Love, the Aston Martin (although it is first introduced in Goldfinger) is shipped out to Istanbul by Q Branch. In Blood Stone Bond drives an unarmed (and apparently not his own) DB5 during a chase sequence in Istanbul, in a bid to prevent the villain from passing on confidential documents. At the end of the pursuit the car is effectively written-off after crashing into a construction site. The car also appears in the James Bond's DLC of Forza Horizon 4 : Best of Bond and as a cash-shop purchase in Rocket League[16].

The Aston Martin DB5 (Reg: BMT 216A) appears briefly in Eclipse Comics' 1989 graphic novel, Permission to Die, as Bond's personal automobile that he drives to work in London.

The DB5 made a prominent appearance in the premiere episode ("The Beginning") of the 1991–92 spin-off animated television series, James Bond Jr., as well as its literary and comic adaptations. Borrowed by Bond's nephew, the vehicle is pursued by agents of the criminal organization, SCUM, who want to procure its electromagnetic pulse (EMP) generator. In reality, the vehicle is not equipped with one. This iteration of the car is equipped with a homing device and remote starter kit. Its most notable feature is its flight mode, whereby its doors fold into wings and a propeller emerges from the radiator grille. The car is destroyed after the SCUM plane it was being carried on crashes in the English countryside. It is implied that Bond Jr's sports car was constructed from the DB5's wreckage.

Playing up to its association with 007, the DB5 also made cameo appearances in media outside the James Bond franchise. It appeared in the 1981 comedy film The Cannonball Run, driven by Roger Moore's character. Two years later, in the TV-film The Return of the Man from UNCLE, George Lazenby, playing a Bond-like character referred to as "JB", also drove a gadget-laden DB5 (with the licence plate "JB"). Another spy show with the homage to Casino Royale called Mission Impossible (1966) in Episode 6 “Odds on Evil” were Steven Hill drives a red Aston Martin DB5 complete with twin yellow flags. Consequently, Timothy Dalton remains the only official Bond actor who has never driven one on screen. However, scripts for his unmade third Bond film show a DB5 was planned to be used.

The most recent appearance of the vehicle was in the 2004 film, The Life and Death of Peter Sellers in which Geoffrey Rush, playing Peter Sellers, is shown driving one at the time of making Casino Royale, even though in real life that film did not feature the vehicle. The car further made a appearance in the popular sandbox game GTA 5 (Grand Theft Auto 5) under the name 'JB700'. It in a mission of the story mode had spikes and a ejecting chair, as well as visible guns on the hood. The car can be bought from Legendary Motor Sports in both the online and story modes. But to many people's dismay, the car does not have the many gadgets of story or the one featured in the movies. Although they all are visible. In a later update to Grand Theft Auto Online, another variant of the car, named JB700W, was added, with the capability to have functional machine guns and a choice between spike and oil slick mines installed, though the ejector seat remains nonfunctional.

The DB5 parked in the Q-Branch lab in Goldfinger.

Filming the DB5 in GoldenEye.

The Aston Martin DB5 (Reg: BMT 216A) makes a surprising return in Skyfall.

Bond inspects the DB5 being repaired in the Q-Branch workshop.

The DB5 destroyed after the events of Skyfall

The DB5 in No Time To Die

Fictional 'classic' motorcar, clearly based on the DB5 (James Bond: World of Espionage). 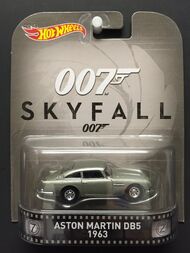 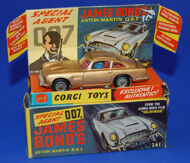 The Corgi toy Aston Martin produced in the 1960s

The DB5 in Forza Horizon 4.

The DB5 in Rocket League.