The Aston Martin DBS is a grand tourer automobile produced by the British manufacturer Aston Martin Lagonda Ltd. from 1967 to 1972. The DBS was featured in the 1969 James Bond film, On Her Majesty's Secret Service, and cameoed very briefly in the following film, Diamonds are Forever (1971). The vehicle also appeared in the Best of Bond DLC pack for the 2018 video-game, Forza Horizon 4.

The DBS was intended as the successor to the Aston Martin DB6, although the two ran concurrently for three years. Powered by a straight-6 engine, it was produced from 1967 until 1972, eventually being phased out in favour of the more powerful DBS V8 and the Aston Martin Vantage.

It was a larger coupé than the DB6, with four full sized seats, but was powered by the same 4.0 L engine as the previous car. Claimed engine output was 282 bhp (210 kW; 286 PS)[1][2], but a no-cost vantage spec engine option substituted Italian made Weber carburettors for the DBS' original SU units, thereby upping output to an advertised 325 bhp (242 kW; 330 PS).[3]

The DBS was intended to have a more "modern" look than the previous series of Aston models (the DB4 through DB6), and it incorporated a fastback style rear end and squared off front grille, atypical of Astons, but very much then in vogue in automotive design circles of the late sixties. Trademark Aston design features, such as a bonnet scoop, knock off wire wheels, and side air vents with stainless steel brightwork were however retained.

The DBS was used by James Bond in the 1969 film On Her Majesty's Secret Service. Although not used in any major action sequences the Aston Martin is driven by Bond in various scenes including the ending where the car is decorated with flowers for his wedding to Tracy. Two cars were lent by Aston Martin for the film; one was used for the studio scenes and a second for the exterior shots. Both cars were registered as GKX 8G.

Unlike Bond's previous car, the Aston Martin DB5, no gadgets were seen in the DBS other than a custom-built storage compartment. Neatly tucked away inside the passenger glove-box are, what appear to be, the disassembled components of an Armalite AR-7 survival rifle; a rifle stock, a suppressor, and a scope. Notably, the DBS also lacked the bullet-proof glass of its predecessor - in the final scenes of the film, Bond's new wife, Tracy, is shot and killed while sitting in the car.

The DBS also appears in a single scene in the subsequent Bond film, Diamonds are Forever (1971). The vehicle can be seen in the background of the Q-Branch workshop (being fitted with missiles of some kind) as Bond talks with Q on the telephone.

The car also appears in the Best of Bond DLC of the open world racing video game, Forza Horizon 4. Its base statistics (out of ten) are Speed 7.0, Handling 5.0, Acceleration 5.8, Launch 7.4, and Braking 5.0. As with all Forza vehicles, the DBS can be customized; with its 4.0L Naturally-Aspirated I6 capable of being changed to a 5.2L V10 or 6.2L V8 (510 hp) and its rear wheel drive (RWD) drivetrain changeable to all-wheel-drive (AWD). Players can also choose to modify various elements such as the rear bumpers and choose from twenty different shades of paint. Using interactive icons, players can examine under the bonnet, the boot, and inside its detailed interior. Unlike other James Bond themed vehicles such as the Aston Martin DB5, the DBS is not equipped with gadgets.

Bond observes Tracy's suicide attempt, as seen in On Her Majesty's Secret Service (1969).

Bond arrives at M's residence, Quarterdeck, as seen in On Her Majesty's Secret Service (1969).

Flower festooned DBS, as seen in On Her Majesty's Secret Service (1969). 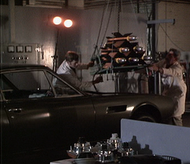 Lab technicians arm the DBS with missiles, as seen in Diamonds are Forever (1971).