An attaché case is a box-style briefcase made of leather, scrunched over a hinged frame that opens into two compartments. It was traditionally carried by an attaché, a diplomatic officer attached to an embassy or consulate officially assigned to serve in a particular capacity (e.g., cultural attaché; military attaché). An attaché case crafted by British luxury luggage manufacturer Swaine Adeney Brigg (and subsequently modified by Q Branch) was prominently featured in Ian Fleming's 1957 novel From Russia with Love and later in its 1963 film adaptation. Attaché cases would also play a role in the 2005 video game adaptation.

Weighing in at 8 lbs (3.6 kg), Q Branch ripped out the careful handiwork of Swaine and Adeney to pack fifty rounds of .25 ammunition, in two flat rows, between the leather and the lining of the spine. In each of the sides there was a flat throwing knife, built by Wilkinsons and the tops of their handles were concealed by the stitching at the corners. The handle of the case hid a compartment containing a cyanide death-pill, triggered by pressure at a certain point. Its lid contained fifty golden sovereigns, which could be poured out by slipping sideways one ridge of welting. Inside the case was a thick tube of Palmolive shaving cream, whose top unscrewed to reveal the silencer for 007's Beretta 418, packed in cotton wool.

The case first makes its appearance in Chapter 13 of Ian Fleming's 1957 novel From Russia with Love. Whilst aboard B.E.A. Flight 130 to Rome, Athens and Istanbul, 007 reaches for the case and takes out a copy of the 1939 novel The Mask of Dimitrios by Eric Ambler. Days later, after obtaining the prized Spektor decoding machine, Bond and cypher clerk Tatiana Romanova board the Orient Express in Istanbul. En-route to Paris, Soviet assassin Red Grant gains Bond's confidence and agrees to share the guard duties in his stateroom. With Bond asleep and unarmed he allows his identity to be known and a confrontation between the pair occurs. Pretending to be fatally shot, Bond lies motionless on the ground and feels for his attaché case, extracting one of the flat-bladed throwing-knives and plunging it into Grant. After a scuffle, Grant is shot by Bond.

In the 1963 film adaptation of From Russia with Love, the briefcase is introduced during a short scene in M's office and is almost identical to the one described in Fleming's novel. The briefcase, now standard issue among 00 agents, is demonstrated to Bond by Major Boothroyd of Q-Branch. He explains how the case functions and notes its hidden features, such as a flat throwing-knife at the top corner of the case, 20 rounds of ammunition stored in 2 cylinders hidden in its base, and fifty gold sovereigns concealed in the lining of the case (25 in either side, accessible by pulling the inside straps). Unlike its novel counterpart, the case contains an anti-tampering mechanism with a magnetized tear-gas cartridge (disguised as a tin of talcum powder). The mechanism is disarmed by turning the case's catches to a horizontal position and opening normally. Inside the case was also an Armalite AR-7 folding sniper-rifle with an infrared scope and .25 ACP ammunition.

The case accompanies Bond throughout the novel and is brought on-board the Orient Express, where it fulfils a similar role to its novel counterpart. As in the novel, assassin Red Grant (this time employed by the criminal organization SPECTRE) gains Bond's confidence and assists him in planning his escape with the Soviet Lektor decoding machine. Grant drugs Romanova and cudgels 007 unconscious as he shows him their planned escape route on a map. Now unarmed and held at gunpoint, Bond asks for a cigarette, which he offers to pay for using gold sovereigns concealed in his attaché case. He manages to trick the greedy assassin into opening another identical case (belonging to the agent whose identity he stole in Zagreb); in the process detonating its tear gas cartridge in his face. The two brawl in the carriage, with Grant eventually gaining the upper hand and attempting to garrote Bond. Struggling to breath, 007 extracts a throwing knife from the nearby case and stabs Grant in the leg, turning his own garrote on him and strangling him to death.

In the subsequent film Goldfinger, reference is made to Bond having a black attaché case that is damaged (presumed destroyed) when examined by Auric Goldfinger's personnel. This may be a reference to the agent briefcase introduced in From Russia with Love, or it could have been another piece of luggage that had been rigged to self-destruct when tampered with.

Although a particular attaché case of the kind found in the novel and film adaptations does not appear in the 2005 video game From Russia with Love, the game does contain numerous locked attaché cases which, when unlocked via a controller key combination, provide useful items such as schematics for upgrading weapons and gadgets. The game also features a briefcase turret which resembles the Swaine Adeney Brigg attaché case found in the novel and film. 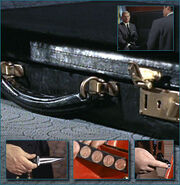 The case and its main gadgetry items

Bond touches the case after Q sets it down.

Interior of the case, packed with clothes, Bond's Walther PPK, etc. on the train to Istanbul
Add a photo to this gallery

Retrieved from "https://jamesbond.fandom.com/wiki/Attaché_case?oldid=97804"
Community content is available under CC-BY-SA unless otherwise noted.