She first came to international attention when she was cast as the glamorous and enigmatic Sévérine in Skyfall, the twenty-third Bond film. Before that she made appearances on the French shows "Père et Maire", "Femmes de loi", "Equipe médicale d’urgence". She is currently filming the French comedy "Un bonheur n'arrive jamais seul" with Sophie Marceau. 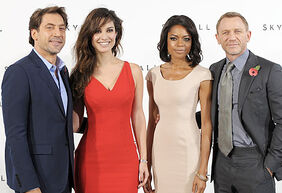 Add a photo to this gallery
Retrieved from "https://jamesbond.fandom.com/wiki/Bérénice_Marlohe?oldid=102423"
Community content is available under CC-BY-SA unless otherwise noted.