The BMW Z3 was the first modern mass-market roadster produced by BMW, as well as the first new BMW model assembled in the United States. The Z in Z3 originally stood for Zukunft (German for future). (The very first BMW assembled in the US was the E36/5, 318i that rolled off the Spartanburg Plant assembly line beginning in October 1994.) The Z3 was introduced as a 1996 model year vehicle, shortly after being featured in EON Productions' 1995 James Bond film, GoldenEye.

The first Z3's were equipped with a 16 valve 1.9 units developing 140 hp, later replaced by a 8 valve version of the same engine that had power output of about 115 hp. Weighing 1150 kg this nimble machine could easily accelerate to 100 km/h in less than 8,5 seconds.

There were a few variants of the car before its production run ended in 2002, including a coupé version for 1999. It was manufactured and assembled in Spartanburg, South Carolina. The Z3 was replaced by the BMW Z4 introduced in late 2002 at the Paris Auto Show. The BMW Z Series are a line of roadsters considered to be successor to the BMW 507

the Z3 was the start of BMW's three film plan deal between BMW and The Bond franchise, the deal started with GoldenEye (film) and it concluded with The World Is Not Enough (film) it was introduced as a 1996 model year vehicle. At that time Karen Sortito created the BMW campaign for the film GoldenEye. Afterwards, while the film was number one at the box office, sales of the car spiked. The entire 1996 BMW Z3 roadster production run, more than 15,000 roadsters, was sold out by the time the car was introduced.

Appearing in 1995's GoldenEye, the BMW Z3 was a controversial choice for some Bond purists, it being the first non-British production car to feature in a Bond movie as the spy's primary mode of transport. A convertible, it comes fully equipped with "all the usual refinements" including a self-destruct system and stinger missiles located behind the headlights. The car in the film is only driven briefly in Cuba, and Bond ends up trading it for Jack Wade's plane. As a result, it has the dubious honor of being one of the few cars Bond gets from Q-Branch which is not destroyed in the field. This wasn't very well received by purists and people of the car world, complaining that the Z3 should have got more screentime after boasting about the weapons and that all the publicity of the car was for nothing, however this was fixed in 1997 with the BMW 750iL of 1997's Tomorrow Never Dies (film) 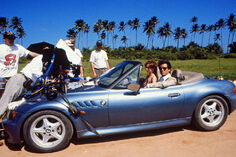 Retrieved from "https://jamesbond.fandom.com/wiki/BMW_Z3?oldid=101508"
Community content is available under CC-BY-SA unless otherwise noted.