179 kg (395 lb) (dry)
The Lightning was a BSA motorcycle made in Birmingham between 1965 and 1972.[1] A fully faired BSA Lightning fitted with front-firing missiles was featured in the 1965 James Bond film Thunderball[2] as a vehicle driven by SPECTRE assassin Fiona Volpe.

The BSA Lightning was designed as the all-round sportbike of the 1960s, planned largely for export to the US market to complement the touring Thunderbolt and the supersports Spitfire. Development of the engine aimed to make it more reliable, quieter and less prone to oil leaks, with top speed sacrificed to improve mid-range and rideability. Nevertheless, with twin carburettors the A65L could still reach 108 mph (174 km/h). Improvements included an oil pressure warning light, but this had a tendency to malfunction, so riders learned to ignore it.[3]

A close ratio gearbox combined with a high lift camshaft made for lively acceleration and performance at higher rpm than the standard A65. The bottom gear was a bit high, however, so riders had to learn to slip the clutch up to 10 mph (16 km/h). Above 5000 rpm customers also complained about excessive vibration, with a tendency to weave above 90 mph (140 km/h). A useful feature was an 'emergency starting' key position for times when the battery was flat to connect the alternator current directly to the ignition coils.

In 1972 the BSA Group were in financial difficulties and, in a last attempt to extend the brand life, a new frame was developed for the A65L. As well as raising the seat height to an impractical 33 inches (840 mm), it actually broke during testing at the Motor Industry Research Association (MIRA) test track, marking the end of one of the most successful range of British twin cylinder motorcycles.[4]

At the behest of SPECTRE's leader, Blofeld, Volpe is sent to assassinate fellow operative Count Lippe as punishment for almost jeopardizing the organization's scheme. As Lippe chases Bond's DB5, Volpe speeds up from behind the Count on her modified, gold-painted BSA Lightning. As he attempts to kill 007, Lippe's vehicle suddenly bursts into flames - shot from behind by the Lightning's rocket launchers. As the assassin streaks past, Lippe's vehicle careers out of control and topples into a ditch where it explodes violently. Her mission successful, the assassin disposes of the motorcycle by dumping it into a lake.

The chase scene was shot at Silverstone racing circuit with UK motorcycle champion Bill Ivy riding the BSA Lightning. For the part Ivy wore a blond wig to look as if it was ridden by Bond girl Fiona Volpe, played by Italian actress Luciana Paluzzi. A working missile launching system was fitted to the motorcycle but the explosion which destroyed Lippe's car was actually detonated remotely by stunt coordinator Bob Simmons.[5] The filming of the scene was recorded in a Ford Motor Company film A Child's Guide to Blowing Up a Motor Car that is on the Ultimate DVD edition of Thunderball. 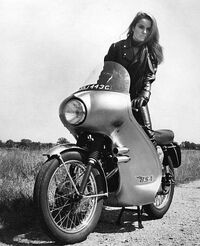 Actress Luciana Paluzzi with the BSA Lightning used in Thunderball.

Volpe dumps the BSA Lightning.
Add a photo to this gallery

Retrieved from "https://jamesbond.fandom.com/wiki/BSA_Lightning_A65L?oldid=91661"
Community content is available under CC-BY-SA unless otherwise noted.