Bambi is a fictional acrobatic guard tasked by Ernst Stavro Blofeld with imprisoning the reclusive billionaire Willard Whyte. The character was created and developed especially for EON Productions' 1971 James Bond film Diamonds Are Forever and was portrayed by actress and singer Lola Larson.

James Bond travels to a luxury mansion in the suburbs of Las Vegas where he believes the millionaire Willard Whyte, hostage to Blofeld, is imprisoned. Entering the house, he is greeted by two athletic women appearing from nowhere. Both appear as Bambi and Thumper and immediately begin to attack Bond using various athletic jumps and kicks. Bond is even choked by Bambi's thighs, but soon gets out from that predicament, only to be thrown into an outdoor pool. Sensing an opportunity to finish Bond off, the two women dive in to the pool and attempt to drown him.

The exhausted and beaten Bond looks to be easy prey for these nimble karate experts and they quickly seize the advantage and hold Bond's head underwater. However, it soon turns out to be a tactical error for the ladies. Transferring the fight to the deep end of the pool, negates their martial arts skills and Bond is quickly able to turn the tables on the girls and holds them both underwater until Felix Leiter and his men show up. Bond continues to hold the ladies underwater for 30 seconds as they thrash about. By now their struggle indicates that they are desperate for air.

Bond lifts their heads up for a quick breath but then it's right back under immediately while he talks amusedly to Leiter, who complains about Bond wasting time in the pool. The bubbles and struggles of the women underwater indicate that they are near drowning at this point and Bond senses that they might be ready to talk. Bond first releases Thumper, and she desperately uses her last breath to swim to the poolside while Bond continues to hold Bambi under.

Thumper knows that her partner needs air so she complies by pointing to the shed below where Whyte is being held. Then Bond releases his hold on Bambi, who desperately breathes and swims to the side, humiliated. Bond, heading for Whyte, leaves behind the exhaustedly coughing women who are holding on to the sides of the pool, gasping for air.

What happens to Bambi after that is unknown. However, it is likely that she experienced a very unpleasant fate, wheter arrested or taken back to Blofeld. In this last case, she was probably killed by her boss as a punishment for her failure.

American stuntwoman Donna Garrett was originally signed to play Bambi in the film [1].

She is named after "Bambi", the titular main character and protagonist in the Disney animated classic Bambi (1942). 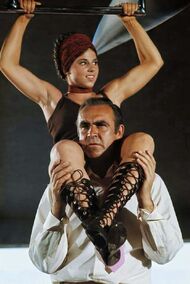 Bambi attacks Bond with her legs.

Bambi and Thumper are defeated by Bond.
Add a photo to this gallery

Retrieved from "https://jamesbond.fandom.com/wiki/Bambi?oldid=83769"
Community content is available under CC-BY-SA unless otherwise noted.