The Bathosub was a one-man midget submarine created at the behest of SPECTRE chief, Ernst Stavro Blofeld; possibly using the resources of Whyte Enterprises Inc.[2] The sleek, white vessel was equipped with self-contained oxygen generators, internal air scrubbers and a sub-to-control communications system.[2] It was housed on an oil platform off the coast of Baja California, ostensibly owned by Whyte Enterprises, and was used by Blofeld in his attempted escape from the authorities. As it was being lowered into the water, James Bond hijacked the crane controls and used the Bathosub as a wrecking-ball; smashing the rig's Satellite control center to pieces. It is presumed to have been either destroyed or impounded[2] by the U.S. authorities. 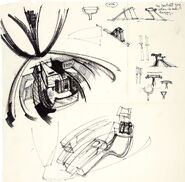