Double or Die
The Bentley 4½ Litre was a British sports car built by Bentley Motors.[1] Replacing the Bentley 3 Litre, it is famous for epitomizing prewar British motor racing. A total of 720 4½ Litre were produced between 1927 and 1931, including 55 models with a supercharged engine known as the Blower Bentley. Ian Fleming's character James Bond drives a 1930 Blower Bentley in three of the 007 Novels, Casino Royale, Live and Let Die and Moonraker.[2] It has since reappeared in a flash forward segment of Charlie Higson's 2007 novel Double or Die.

Today, Bentley 4½ Litre automobiles from this pre-war period, the "Belle Époque" of the automobile for some,[3] sell for around €100,000 and Blowers can fetch more than €1.5 million. The Blower is the most iconic pre-war Bentley and is coveted by collectors despite never winning a single race.[4][5] For many, the 4½ Litre is to automobiles what the Spitfire is to aircraft.[4][6]

The 24 Hours of Le Mans endurance race is a 24 hour race around the Circuit de la Sarthe. The inaugural race was held May 26–27, 1923. In 1924 Canadian John Duff won the competition in his personal car, a Bentley 3 Litre.A win which would bring much attention to Bentley's vehicles.

After two years without success, Bentley convened a group of wealthy British men to renew Bentley's success.[7] Both drivers and mechanics, these men, later nicknamed the "Bentley Boys", drove Bentley automobiles to victory in several races between 1927 and 1931, including four consecutive wins at the 24 Hours of Le Mans, and forged the brand's reputation.[8][7] It was within this context that, in 1927, Bentley developed the Bentley 4½ Litre. [9]

It was also at this time that one of the Bentley Boys, Sir Henry "Tim" Birkin, aided by a former Bentley mechanic, decided to produce a series of five supercharged models for the competition at the 24 Hours de Le Mans.[10] Thus the Blower Bentley was born. Bentley Blower No.1 was officially presented in 1929 at the British International Motor Show at Olympia, London. The 55 copies were built to comply with 24 Hours de Le Mans regulations.[5] Birkin arranged for the construction of the supercharged cars having received approval from Bentley chairman and majority shareholder Woolf Barnato[9][5][11] and financing from wealthy horse racing enthusiast Dorothy Paget.[9][12][13] Development and construction of the supercharged Bentleys was done in a workshop in Welwyn by Amherst Villiers, who also provided the superchargers.[9]

Even though manufacturers like Mercedes-Benz had been using superchargers for years[4], W.O. Bentley (the company's founder) was hostile to forced induction and believed that "to supercharge a Bentley engine was to pervert its design and corrupt its performance."[9][13] However, having lost control of the company he founded to Barnato, he could not halt Birkin's project.[9]

In November 1931, after selling 720 copies of the 4½ Litre - 655 aspirated and 55 supercharged - in three different models (Tourer, Drophead Coupé and Sporting Four Seater[1]), Bentley was forced to sell his company to Rolls-Royce for £125,175, a victim of the recession that hit Europe following the Wall Street Crash of 1929.[4][14]

The robustness of the 4½ Litre's latticed chassis,[15] made of steel and reinforced with ties,[16] was needed to support the heavy cast iron inline-four engine.[15]

The Bentley's tanks - radiator, oil and petrol - had quick release filler caps that opened with one stroke of a lever. This saved time during pit stops.[6] The 4½ was equipped with a canvas top stretched over a lightweight Weymann body.[1] The hood structure was very light but with high wind resistance.

Brakes were conventional, consisting of 17-inch (430 mm) drum brakes finned for improved cooling and operated by rod. Semi-elliptic leaf springs [15][16] were used at front and rear.

The essential difference between the Bentley 4½ Litre and the Blower was the addition of a Roots-type supercharger to the Blower engine by engineer Amherst Villiers, who had also produced the supercharger. W. O. Bentley, as chief engineer of the company he had founded, refused to allow the engine to be modified to incorporate the supercharger. As a result, the supercharger was placed at the end of the crankshaft, in front of the radiator. This gave the Blower Bentley an easily recognisable appearance and also increased the car's understeer due to the additional weight at the front.[15] A guard protected the two carburetters located at the compressor intake. Similar protection was used, both in the 4½ Litre and the Blower, for the fuel tank at the rear.[6][18]

Between 1927 and 1931 the Bentley 4½ Litre competed in several competitions, primarily the 24 Hours of Le Mans. Far from being the most powerful in the competitions, the 4½ Litre of Woolf Barnato and Bernard Rubin, raced neck and neck against Charles Weymann's Stutz Blackhawk DV16, setting a new record average speed of 111.12 km/h (69 mph); Tim Birkin and Jean Chassagne finished fifth. The next year, three 4½ Litres finished second, third, and fourth behind another Bentley, the Speed Six, which possessed two more cylinders.[11][20][21]

The naturally aspirated 4½ Litre was noted for its good reliability. The supercharged models were not; the two Blower models entered in the 1930 24 Hours of Le Mans by Dorothy Paget, one of which was co-driven by Tim Birkin, did not complete the race.[21] In 1930, Birkin finished second in the French Grand Prix at the Circuit de Pau.[11][21][22]

Ian Fleming's character James Bond drives a 1930 Blower Bentley in three of the 007 Novels, Casino Royale, Live and Let Die and Moonraker.[25] In the books, Bond drives one of the last Blower Bentleys built, a battleship grey Convertible Coupé, with French Marchal headlamps.

In Casino Royale Fleming writes that Bond bought the car "almost new" in 1933 and had it carefully stored during the war. In Double or Die, the Bentley's backstory is expanded upon, and coincides with Bond's buying it in 1933, and confirming that James was indeed 13 at the time. Bond came into possession of the Bentley at the suggestion of his friend Perry Mandeville. It was for sale on blocks behind a Cambridge pub because it had become too expensive for the owner to keep, and his wife insisted he sell it. James passed on the offer, much to Perry's dismay, because he was already driving a 1.5 liter Bamford & Martin Sidevalue Short Chassis Tourer willed to him by his uncle Max Bond. However, the Bamford was totaled in a car chase and after being sent a cut of Casino winnings he had helped American beer baron Dutch Flegenheimer to claim, he was able to buy the car. In Fleming's second novel, Live and Let Die, he erroneously states that the car is a 1933 model. However, in November 1931, production of the vehicle ceased. Realizing this, he went on to correct this error in Moonraker, describing it as a 1930 4½ Litre with the Amherst-Villiers supercharger. [26].

In the novels, no gadgets were installed as this was Bond's personal vehicle that in Casino Royale is mentioned as being a hobby that Bond enjoys working on. Its only armament is a high-powered revolver Bond keeps in the glove compartment. The Bentley 4½ Litre was destroyed during a chase sequence in Moonraker.

In Charlie Higson's 2005 prequel to the main James Bond series, SilverFin, James Bond's aunt Charmian Bond drove a Green, four cylinder, supercharged four-seater Bentley 4½ Litre. James loved his aunt's car, and had decided that when he was an adult he should like to drive the same model.[27] 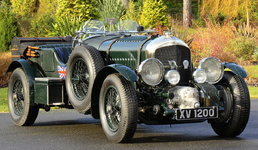 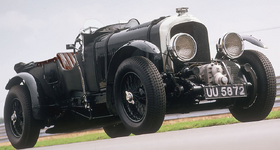