Bianca was a fictional intelligence operative employed by the British Secret Service. A minor character and Bond girl, she appeared in EON Productions' 1983 James Bond film Octopussy and was portrayed by Tina Hudson.

James Bond's colleague Bianca aides him when he arrives in Latin America to destroy an enemy spy plane. Meeting him at a horse-training event, Bianca provides Bond with a disguise (complete with a fake moustache) in order to make him look like Colonel Luis Toro. However, 007's cover is blown whilst infiltrating the aircraft's hanger. Minutes later, Bianca spots Toro's paratrooper guards driving away with a captured Bond. She speeds up to the vehicle in her Jeep and flashes her bare thighs to distract the guards. Seizing the opportunity, Bond pulls the rip cords on the guards' parachute harnesses. Before Bond escapes in an Acrostar Bede Jet hidden in the back of the Jeep's horse trailer, he kisses Bianca goodbye and says that he will meet her in Miami. 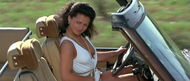 Retrieved from "https://jamesbond.fandom.com/wiki/Bianca?oldid=85561"
Community content is available under CC-BY-SA unless otherwise noted.