Bill Tanner is MI6's Chief of Staff. Tanner is a regular literary character from Fleming and Gardner's novels, as well as Kingsley Amis' Colonel Sun, but has never been considered a regular cinematic character. He appears infrequently in the novels, but is a larger, more regular character in the later continuation series by John Gardner and Raymond Benson.

A man about Bond's age and height, Tanner served as a military sapper in the second world war, and obtained the rank of colonel.[1] Tanner first met Bond toward the end of the war in the Ardennes region of mainland Europe. However they became close over a dinner of Sole the day after Bond was hired at SIS. Tanner was already Bond's superior when he joined the service, but this was easy to ignore.[2] After the war, he became MI6's Chief of Staff reporting directly to M. He was present at the meeting that first proposed the formation of the 00 program.[1]

Tanner has spent over a decade as M's number two and has signs of visual age due to the strenuous nature of the job. Superb in a crisis, and blessed with a dry sense of humour, Tanner is also Bond's staunchest ally in the Service, and they often enjoy lunching together or a round of golf when off-duty. A family man, Tanner is just a little envious of Bond's freedom.

When the original 007 turned up dead in France, Tanner had to inform M, and discuss the cause of death and potential replacements. Tanner suggested James Bond, who had seen success in previous missions, and was a personal friend of Tanner's. After Bond completed his second assassination, he was due to receive his place in the 00 program. After getting settled in his new office, Tanner called him up to meet with M, and accompanied him to his offices, informing him of a new assignment that would be less straightforward than an assassination. Tanner went in ahead of Bond, and helped to brief the man on his assignment to find 007's killer before he left the office as the new 007.

Bond tests his shooting abilities at a targeting range before his invitation from M to attend a card game with him at Blades against Sir Hugo Drax. It is mentioned that the test scores will be passed to Tanner, and that only he and M have the privilege of knowing the accuracy scores of agents.

Tanner initially questions Bond's future field effectiveness after letting himself be poisoned by Rosa Klebb which almost killed him.

When Bond returns to London, brainwashed by the KGB, Tanner is very dubious of Bond's story and discourages M from seeing him. He offers to see Bond before M in case of a plot, though M refuses, and invites Bond to lunch which he likewise abstains. When Bond subsequently attempts to assassinate M in his office, Tanner had already called in the head of security to Miss Moneypenny's desk. The two throw themselves into the room and subdue Bond dragging him into Tanner's office.

M conveys his concern at 007's state of mind but is optimistic Bond can be "un-brainwashed" by Sir James Moloney. He asks Tanner to arrange for Moloney to see Bond and reinstate his pay. Then to pull the file on Francisco Scaramanga and organize his elimination to be Bond's next assignment to "test" his skills and abilities following Bond's mental recuperation.

When Sir Miles is kidnapped from his home, Quarterdeck, Tanner takes over as temporary head of MI6. He, Ronnie Vallance and Bond investigate the crime scene and work out a plan to find M. Tanner sends Bond to Greece, where he is to rendezvous with head od station G, Stuart Thomas' agents and pursue Colonel Sun Liang-Tan. 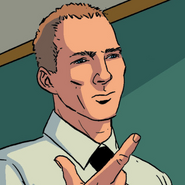 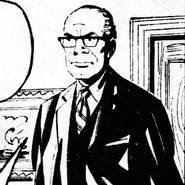 Bill Tanner by John McLusky in You Only Live Twice.
Add a photo to this gallery

Retrieved from "https://jamesbond.fandom.com/wiki/Bill_Tanner_(Literary)?oldid=99461"
Community content is available under CC-BY-SA unless otherwise noted.