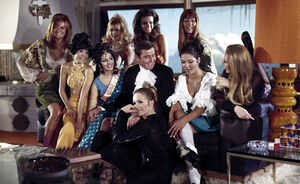 The Angels of Death are twelve beautiful women from all over the world (though only from the UK in the novel) Henchwomen of Irma Bunt being brainwashed by Blofeld under the guise of allergy treatment in the Bond film On Her Majesty's Secret Service. Their mission is to help Blofeld contaminate and ultimately sterilize the world's food supply according to their respective allergies, which are staple foods from their homeland. Blofeld claimed he will rescind this threat if all his past crimes are pardoned and he is recognized as the current Count de Bleauchamp.

Retrieved from "https://jamesbond.fandom.com/wiki/Blofeld%27s_Angels_of_Death?oldid=96993"
Community content is available under CC-BY-SA unless otherwise noted.