Ernst Stavro Blofeld is the fictional head of the global criminal organisation SPECTRE. Based on the Thunderball character of the same name, he appears in the novel's unofficial film adaption, Never Say Never Again (1983), and is portrayed by Swedish actor Max von Sydow. He was one of eight men to play the iconic role of Blofeld on screen.

After years of profitable ventures in the areas of terrorism, extortion, kidnapping and drug trafficking, the criminal secret organization SPECTRE, headed by its founder and leader Ernst Stavro Blofeld, ventures into its most ambitious endeavor. Blofeld has devised a plan to steal two nuclear missiles from NATO in order to extort from the member states a kind of annual "terrorist tax" equal to the equivalent of 25% of their oil purchases. In doing so, he uses the involuntary help of US Air Force officer Captain Jack Petachi, who was made heroin addicted to keep him under control. At Blofeld's instructions, a complicated surgical procedure was performed on Petachi's right eye to make his retinal pattern identical to that of the President of the United States of America, giving him access to the nuclear-warheaded missiles.

While planning and coordinating the operation as Supreme Commander in the security of SPECTRE headquarters, his immediate subordinate Maximillian Largo is tasked with ensuring smooth implementation and eliminating any company secrets, including Captain Petachi this had served its purpose.

After Largo has secured the missiles, Blofeld turns in a video message that shows him in well-known manner only to chest height and with his white Persian cat in the arm, directly to NATO to make his demands and thrusts in his innermost circle already sure of victory with champagne.

However, James Bond manages to foil the plot and Largo is killed. What has become of Blofeld after this is uncertain, but since he is a survivalist, he is probably submerged and lurking somewhere in secret on a new opportunity to strike again one day.

Dressed in a well-fitting three-piece, gray pinstripe suit with a wine-red bow tie and a delicately lilac-colored shirt, the sleeve cuffs are closed with solid gold cufflinks. From the breast pocket of his jacket protrudes a small piece of his reading glasses and his lapel is decorated with a red pin.

He has, like other film incarnations in front of him a penchant for white Persian cats, has a very calm, sovereign nature and is always thoughtful and prudent. He has prepared his master plan from a long-term and extensive financial investment. In keeping with his literary counterpart, he is a cool-calculating "businessman of evil" who leaves nothing to chance and rules over SPECTRE with an authoritarian hand. 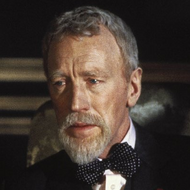 Retrieved from "https://jamesbond.fandom.com/wiki/Blofeld_(Max_von_Sydow)?oldid=86461"
Community content is available under CC-BY-SA unless otherwise noted.