Blonde Beauty is a fictional character in the James Bond film Moonraker. She is portrayed by French-Polish actress Irka Bochenko and is a hechwoman for Hugo Drax.

The Blonde Beauty is one of Drax's Girls. Bond first encounters her at Venini Glass, where she works as a receptionist. She asks if she can interest him in something, and he says he will have a look around, to which she tells him to go anywhere he wishes. As he leaves, she has a devious look on her face.

After Bond lands in the jungle, he sees a woman in a white robe walking under a waterfall and into the woods and follows her to a temple. Once she arrives, the woman turns around to reveal herself as the blonde receptionist. She lures Bond inside the temple, where there is a waterfall. She walks over a bridge and signals for him to follow her, as the other girls reveal themselves. Bond walks closer to the water and is thrown in by a trap door, as a python swims into the water and the blonde beauty and her friends watch him with devious smiles. Bond manages to escape the trap.

Her final fate is unknown but she presumably dies when the space station explodes.

The Blonde Beauty seems to be the leader of Drax's Girls, due to the fact that her uniform was different from all of the other girls when they lure Bond into a trap. 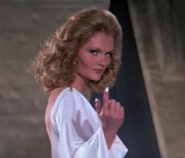 Add a photo to this gallery
Retrieved from "https://jamesbond.fandom.com/wiki/Blonde_Beauty?oldid=88962"
Community content is available under CC-BY-SA unless otherwise noted.