Bob Conley was a fictional geologist in the employ of Zorin Industries. A supporting antagonist, the character first appeared in the 1985 James Bond film A View to a Kill, portrayed by the late American actor Manning Redwood. In addition, he was later adapted for the 1983-87 tabletop role-playing game James Bond 007.

Bob Conley is a corrupt geologist who was previously employed as chief engineer in a South African gold mine, where a cave-in killed twenty miners. To avoid charges, he fled South Africa, and subsequently began working for Zorin Industries. Henceforth in charge of Max Zorin's oil pumping project in San Francisco Bay, Conley pumps sea water into the San Andreas fault and Hayward fault through a series of oil in anticipation of Project Main Strike - a scheme to generate an artificial earthquake capable of permanently submerging Zorin's business rivals in Silicon Valley.[1] During the final phases of the plan, Conley and his miners are tasked in providing explosives that would set off the reaction in Main Strike Mine. However, Conley becomes extremely shocked that Zorin intends to blow up and flood the mine earlier than scheduled, which would kill many of the workers (including May Day, Jenny Flex and Pan Ho). When Conley points this out, Zorin does not care by saying that it is a "convenient coincidence", implying that he is willing to kill them all to speed up the process of his plan. Realizing the depths of his employer's depravity, Conley angrily berates Zorin for his lack of concern towards his men, but Scarpine just clubs Conley on the back with a wrench, knocking him out. Zorin then floods the mines before he and Scarpine shoot the miners. Conley, unconscious, is swept away by the rising waters in the mines. It is inferred that he drowns in the mine, along with Pan, Jenny and many others.

Eventually, killing Conley proves to be Zorin's big mistake as it drives an angry May Day to foil Zorin's plot by sacrificing herself to get the bomb out into open air, thus saving Silicon Valley and allowing James Bond to defeat Zorin for good. 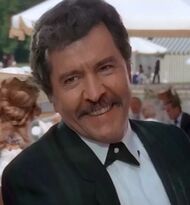 Retrieved from "https://jamesbond.fandom.com/wiki/Bob_Conley?oldid=90408"
Community content is available under CC-BY-SA unless otherwise noted.