A Bond Girl is a character who portrays a significant supporting role or a love interest in a James Bond film, novel or video game. They typically have names that are double entendres, such as "Pussy Galore" or "Plenty O'Toole."

Bond girls might be victims rescued by Bond, fellow agents or allies, villainesses or members of an enemy organization. Other female characters such as Judi Dench's M, Rosa Klebb, Irma Bunt and Miss Moneypenny are not classified as Bond girls.

The role of a Bond girl is typically a high-profile part that can give a major boost to the career of unestablished actresses, although there have been a number of Bond girls that were well-established prior to gaining their role. For instance, Diana Rigg and Honor Blackman were both Bond girls after becoming major stars for their roles on the television series, The Avengers. Additionally, Halle Berry won an Academy Award in 2002, an award presented to her while in the midst of filming Die Another Day.

Ursula Andress is often considered the first Bond girl, playing Honey Ryder in the film Dr. No (1962). She was, however, preceded by Eunice Gayson who played the character Sylvia Trench. Trench is the only Bond girl to appear as the same character in more than one film, appearing again in From Russia with Love (1963). Initially, Trench was planned to be a regular girlfriend of Bond's in the series, but was subsequently dropped after the encore appearance.

It should be noted that Valerie Mathis was the first ever Bond girl on screen in the 1954 version of Casino Royale. She was played by Linda Christian.

To date, only two Bond girls has captured the heart of James Bond. Tracy di Vicenzo played by Diana Rigg, marries Bond in On Her Majesty's Secret Service (1969). At film's end, Tracy Bond is gunned down by 007's nemesis Ernst Stavro Blofeld. It was initially planned that her death would actually occur in Diamonds Are Forever (1971), but this idea was dropped during filming of On Her Majesty's Secret Service when current-Bond George Lazenby announced he would step down from the role. The other girl is Vesper Lynd in Casino Royale (2006) who was secretly working for Bond's enemies and shared the same fate.

Within the official series, Maud Adams is the only actress to portray a main character as two different Bond girls in two different films, starting as Andrea Anders in The Man with the Golden Gun in 1974 and again as the title character in Octopussy (1983). She additionally appears as an extra in a third Bond film, A View to a Kill in 1985. Two other girls, Martine Beswick (Thunderball) and Nadja Regin (Goldfinger) also appear in a second adventure, appearing first in From Russia with Love. Tsai Chin appeared in two Bond films as well You Only Live Twice (1967) as a Ling and later as Madam Wu in Casino Royale (2006).

In 1995 Famke Janssen, who portrayed Xenia Onatopp, was considered the only major female character (and villain) whom Bond does not bed. However in 2008, lead Bond Girl Camille Montes also shows a restraint to Bond's usually forward charms.

Becoming more frequent, traditional Bond girls that have romantic trysts with Bond, are later discovered to be villainesses starting with Sophie Marceau's Elektra King in The World Is Not Enough (1999) and Miranda Frost portrayed by Rosamund Pike in Die Another Day (2002).

In late 2014, it was announced that Monica Bellucci will play Lucia Sciarra in Spectre (2015). At age 50, Bellucci made record as the oldest Bond girl in the film series. Previously, Honor Blackman held record, playing Pussy Galore in Goldfinger, aged 39 in 1964. Both actresses play the unlikely role, of being a Bond girl older than James Bond.

In addition to those actresses mentioned above, the Bond films traditionally have groups of women in the background whose general purpose is nothing more than eye candy: they include the sunbathing Miami beauties and Pussy Galore's Flying Circus in Goldfinger, the Thai girls at the kung fu school in The Man With the Golden Gun, Tiger Tananka's bathing beauties in You Only Live Twice, and Sheik Hossein's harem in The Spy Who Loved Me. However, in On Her Majesty's Secret Service, Moonraker, For Your Eyes Only, Octopussy, A View to a Kill, and The Living Daylights these women were also referred to in the media as full fledge Bond girls to provide added publicity for the film through eye-catching magazine and newspaper appearances.

In On Her Majesty's Secret Service, they include Blofeld's Angels of Death. In Moonraker (1979) this included members of Hugo Drax's "master race" and a group of women encountered by Bond in the jungles of Brazil, in For Your Eyes Only (1981) many women were seen frolicking around a villain's pool, while in Octopussy (1983) they served mainly as the title character's servants and guards. In A View to a Kill (1985) they adorned Max Zorin's outdoor reception and in The Living Daylights (1987) they served as decorations at the villain's swimming pool and later Bond overpasses a harem in Tangiers. Although the Bond films haven't stopped making use of feminine "eye candy" completely, such large "Bond girl groups" have not featured again since The Living Daylights. 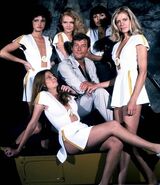 Mary Goodnight was a supporting character in several Bond novels before graduating to full Bond girl in The Man with the Golden Gun. The short stories "Quantum of Solace", "The Living Daylights" and "The Property of a Lady" feature female characters in prominent roles, but none of these women interact with Bond in any sort of romantic fashion.

*Playboy Playmate Lisa Dergen is, to date, the only real-life person to be featured as a Bond girl in any literary Bond story.