"Yes, I am invincible!"
― Boris Grishenko's catchphrase and last words.[src]

Boris Grishenko worked at the Severnaya observatory in Siberia which watched over the two weapons satellites, Petya and Mischa. He is first seen helping fellow programmer Natalya Simonova get into a programme by using a perverse female password much to another fellow programmer Anna Nishkov's disgust, especially when she sees a perverted cartoon likeness of herself on the screen. She scoffs at his boorish attitude, remarking "He wouldn't know woman if one came up and sat on his head," much to Natalya's amusement.

Another program Boris made was to triangulate on the origin of an outside program, he hacked into the US Department of Defense. Boris finished it to the FBI by sending a spike, with a message "Better luck next time, slugheads."

Later, Boris disappeared when he was "going for a cigarette" and was never seen again. He had actually slipped away and flew off with General Arkady Ourumov and Xenia Onatopp, having allied himself with them and Alec Trevelyan, head of Janus to steal the GoldenEye satellite, but not before Xenia massacred multiple Severnaya employees and activated a satellite to fire on Severnaya as "target practice" in electromagnetic warfare. This succeeded, as the Severnaya facility was destroyed. A Russian airbase a few hundred kilometers away was alerted that Severnaya was under attack, and deployed three fighter jets to intercept the attackers. The electromagnetic pulse had killed the fighter pilots as well, with one jet crashing into the satellite dish.

Natalya was the sole survivor of the Severnaya massacre, as she had hid herself in a cupboard which had shielded her from the radiation and ensuing debris. Believing Boris to be innocent and of good fortune to have excused himself for a smoke prior to the carnage, she shouted for Boris, believing him to be in the area (unaware he was spirited away by Ourumov).

Ourumov later reports to the Russian Defense Minister Dmitri Mishkin, passing off Grishenko as a lucky survivor. Natalya, still also under the impression that Grishenko was lucky to have survived, attempts to contact him via email. After telling him that Ourumov shot everyone at the bunker, Boris tells her to meet him at a nearby church and to trust no one. At the church, Boris lets Onatopp capture Natalya.

After saving Natalya and killing Ourumov, James Bond does not know how to locate Alec's base. By accessing the computer inside the train Natalya manages to hack inside Boris' network. Although Boris tries to rip out his servers, Natalya finds out that the base is at Cuba.

At the base, Trevelyan tells Boris to heave the base out of the lake. Boris claims that he is not ready but Trevelyan angrily urges him to do it anyway. After the base has emerged, Trevelyan hands Boris the GoldenEye master control key, threateningly telling Boris that it better be working. While Boris makes the final preparations, Trevelyan is handed a tablet by one of his henchman and watches footage of Bond and Natalya sneaking onto the base. He sends his men to deal with Bond and orders Boris to have the GoldenEye satellite target London, as they activate the weapon. Eventually, Bond and Natalya are captured and brought before Alec. Boris is delighted to see Natalya, but she furiously slaps him and continues to attack until she is restrained by guards. He picks up Bond's explosive pen that had fallen to the ground and starts to click it. Natalya tells him of her disgust by his betrayal and that millions of people may die because of his sick games.

He furiously raises a clenched fist to her face, but Trevelyan stops him and sends Boris back to his computer to check whether Natalya has done any harm hacking before she was captured. Big-mouthed, Boris brags that Natalya does not have his skills and would be unable to hack into the GoldenEye. Boris' overconfidence is misplaced, as soon thereafter the alarms are activated, with Boris now stating that GoldenEye is about to re-enter Earth's atmosphere which would cause the satellite to ignite and explode, in twelve minutes' time. Boris tries to hack back into the system, viciously clicking the pen, whilst Bond counts the many times it is clicked, knowing that three clicks arm its grenade, whilst three more disarm it. Bond senses an opportunity and knocks the pen from Boris' hand which falls near the gasoline canister, causing it to blow up. Fuelled by the gasoline and the explosive charge Bond set earlier, the explosion destroys almost the entire control room. However, Boris' computer equipment survives. Alec dispatches a guard to kill Boris if he fails to break Natalya's code or tries to escape, and then sets off to hunt down Bond.

Eventually, Boris manages to access the system and resets the antenna. However, Bond, who has meanwhile reached the antenna, disables the mechanism by jamming a metal bar into the rotation belts, causing grave harm to the system. This eventually results in a giant explosion that destroys the remainder of the base and kills Trevelyan. Miraculously, Boris survives. Emerging from the ruins, he loudly exclaims that he's invincible. But he celebrates too soon as at the same moment, the canisters behind him that contain liquid nitrogen explode, covering and freezing Boris to death.

Boris was a featured character in the 1997 video game Goldeneye 007 for the Nintendo 64. He could be one of the eight main characters played in the multiplayer mode. He was featured in two stages. The first stage was the second mission, or Bond's first trip to Severnaya (a main difference from the film is that Bond never went to Severnaya). In the first stage he is known as "Programmer" and "Boris" in the second stage. Bond is ordered to capture Boris in Severnaya, then force Boris to disable the security so MI6 can hack the Severnaya database. (Boris dying or fleeing the Severnaya facility before Bond captures him would result in a failed mission.) If Bond succeeds at capturing Boris, he will do as Bond commands, however his tampering with the mainframe will sound the alarm, resulting in Bond having to fight multiple Soviet soldiers, although the mission will be successful.

Boris is mentioned again in the Train level, when Natalya tries to use the computer in Trevelyan's dining car to track him to Cuba. Boris makes his second and final appearance in Trevelyan's base, feigning innocence to Bond before attempting to pull a gun on him. Being utterly incompetent in firearms, Boris fumbles and drops it. He begs for his life, saying Trevelyan made him do it and then runs away shouting his catchphrase when Bond's back is turned. As in Severnaya, killing Boris results in mission failure; Natalya, still unaware of the depth of Boris' treachery, will refuse to help Bond further if he kills him, claiming that Boris was only a pawn of Trevelyan's and did not deserve death. In order for the mission to succeed, Bond must allow Boris to flee.

Though a brilliant computer programmer, Boris was also known to be perverse and perverted mostly by the way he used female body parts as his access codes and passwords and also shown to be full of arrogance and self-confidence especially when he shouted "I am invincible" whenever he succeeded in finishing a task.

He later became a backstabbing traitor having sided with Janus to steal a dangerous electronic satellite that was used to murder his fellow programmers at Severnaya to leave no witnesses of the theft.

He was shown to be friends with Natalya who saw him just as an annoying little brother and was a bit more patient with his wayward antics, but then her friendship with him turned to hatred when she realised he was partly responsible for the murder of Anna and all the other people at the Severnaya observatory as well as him being willing to kill more people for personal profit. 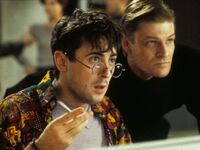 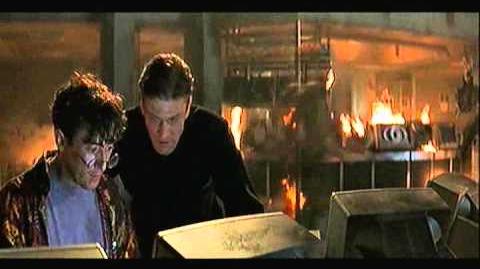 GoldenEye Boris - I Am Invincible!