General of the Army (self-styled)

"You know, you could've been a live rich man... instead of a poor dead one."
― Brad Whitaker to James Bond.[src]

Brad Whitaker was a fictional American arms dealer and one of the two main antagonists in the 1987 James Bond film The Living Daylights, alongside General Georgi Koskov. He was portrayed by American actor Joe Don Baker.

Brad Whitaker is an international black market arms dealer from the United States. He is fascinated by war - he always wears a US military uniform with the US insignia of General of the Army (5 stars General) - but his actual military career is a failure, so he turns to arms dealing to organize his own personal military force. Expelled from West Point for cheating, he spends a short stint as a mercenary in the Belgian Congo before working with various criminal organizations to help finance his first arms deals. He resides in Tangier, Morocco. He loves military history, and it is implied that he Wargames various historical conflicts using automated miniature figures and effects, such as the battles of Agincourt, Waterloo, and Gettysburg. In a conversation with James Bond, Whitaker believes that Pickett's Charge should have been made up Little Round Top, and that if Grant was in charge of the Union at Gettysburg, he would have crushed the Army of Northern Virginia, ending the war.

Whitaker even has a pantheon of "great military commanders" in his headquarters, which included some of history's most famous and infamous figures, such as Adolf Hitler, Napoleon I of France, Genghis Khan, Julius Caesar, Alexander the Great, and Attila the Hun. Whitaker holds these men in high regard and calls them "surgeons who removed society's dead flesh". Perhaps the most disturbing thing about this collection is that all representations of these "surgeons" are sculpted to resemble Whitaker himself, which is highly noticeable when Whitaker hides among the statues waiting for General Pushkin to visit.

Whitaker hires the help of Soviet General Georgi Koskov to secure a large shipment of opium from the Snow Leopard Brotherhood in Afghanistan for $500,000,000 worth of diamonds that he had obtained from an arms deal with the Soviets. At the same time, they attempt to use James Bond to eliminate the Soviet head of secret operations, General Pushkin, on the basis that he has instituted an ongoing operation called "Smert Shpionam" meaning "Death to Spies." Actually, it is their men, especially Koskov's henchman Necros, who are involved in killing British secret service agents. After thwarting Whitaker's plans, Bond hunts him down at his Tangier headquarters and kills him after a game of cat-and-mouse in his gaming room, with him using high-tech weapons (such as a light machine gun with an integral ballistic shield), and Bond using his Walther PPK. After Bond hides behind a bust of British commander Wellington, he sets his key-ring finder behind it. Whitaker gets right in front of it, and the key-ring finder explodes, triggered by Bond's wolf whistle. The explosion topples the bust and podium on top of Whitaker, crushing him through a glass display case containing one of his miniature wargaming setups resembling Waterloo. He thus dies on the battlefield after all, Bond ironically quipping, "He met his Waterloo." 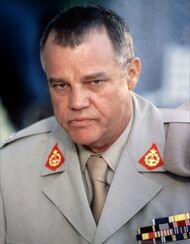 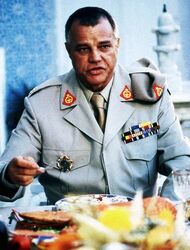 Whitaker meeting General Leonid Pushkin in his house in Tangier

Whitaker being confronted by James Bond in his war museum

Retrieved from "https://jamesbond.fandom.com/wiki/Brad_Whitaker?oldid=93142"
Community content is available under CC-BY-SA unless otherwise noted.