Scar on his right face

Deceased; fell to his death

Braun was a fictional enforcer and one of the Sanchez Cartel's three main henchmen alongside Dario and Perez; serving as the silent muscle of the three. The character appeared in the 1989 James Bond film Licence to Kill, portrayed by actor Guy De Saint Cyr, and was fleshed out in John Gardner's accompanying novelization.

One of the Sanchez Cartel's three main enforcers, little background information was provided for Braun, aside from John Gardner's novelization noting in passing that he was a German who had a price on his head back in his native Berlin.[1] Braun accompanied Sanchez as he pursued his mistress, Lupe Lamora, to the Bahamas, catching her with another man, Alvarez. While Braun held Alvarez by his arms, Dario cut out his heart. He then escaped with Dario into hiding as Sanchez was arrested by the DEA. Both men resurfaced after Sanchez was freed from jail and were among the men responsible for the murder of Della Leiter and the kidnapping and maiming of Felix Leiter.

As James Bond and Pam Bouvier are secretly sabotaging Sanchez's operation and framing other subordinates of his with treachery, Sanchez's men find money stolen by Bond in Milton Krest's decompression chamber, leading to Sanchez suspecting Krest's betrayal. Braun serves as witnesses to Krest's execution afterwards. He is also present at Sanchez's chemical plant where the cocaine they trafficked was to be ground up and mixed into gasoline for transport via gasoline trucks. After Bond's sabotage and destruction of the facility, Braun executes another of Sanchez's henchmen, Colonel Heller, due to his attempting to escape with Sanchez's stinger missiles, and brings up the rear of the convoy of tanker trucks in his own personal pickup truck.

Braun catches up to the convoy and, with Perez riding shotgun and the other thugs riding in the back, drives after Bond. Braun shows off his recklessness by driving through a wall of flame from a destroyed tanker, causing the henchmen riding in the back to jump out to safety and setting his tires on fire. Seeing Bond hanging onto the back of a tanker Perez attempts to shoot at him, but the agent opens a gas valve in the tanker and dumps a long trail of spilled gasoline on the road. The already burning tires of Braun's pickup truck suddenly combust from the spilled gasoline, causing Braun to lose control of the truck. The burning truck careens off the road, barely missing Pam Bouvier's plane, and tumbles into the air ensuring him a ghastly demise. 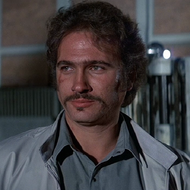 Perez and Braun fall to their deaths, as seen in Licence to Kill.
Add a photo to this gallery

Retrieved from "https://jamesbond.fandom.com/wiki/Braun_(Guy_De_Saint_Cyr)?oldid=96273"
Community content is available under CC-BY-SA unless otherwise noted.