Deceased, accidentally killed himself with an explosive keychain put on him by Bond

"Carlos Nikolic" was the assumed identity of a fictional freelance weapons manufacturer and terrorist. A minor antagonist, the character first appeared in the 2006 James Bond film, Casino Royale, portrayed by Italian actor, Claudio Santamaria, and was later seen in the 2008 video-game, 007: Quantum of Solace.

The terrorist financier Le Chiffre uses a Ugandan warlord's money to short-sell stock in Skyfleet, a promising aerospace company, thus betting the money on the company's failure. After his original bomb-maker is killed by James Bond in Madagascar, Carlos is hired to destroy the company's Skyfleet S570 prototype.

After 007 has killed his boss Alex Dimitrios, the spy notices that the ticket has disappeared and that the bag that was stored in the cloakroom under that ticket has gone. Running outside to be confronted by the mass of people, Bond uses quick thinking to call the person using Dimitrios' phone, since he had sent a text to him already. After identifying the target, Bond follows Carlos to Miami International airport.

At the airport, Bond follows the terrorist who changes into a police uniform. He enters a restricted area just before Bond can stop the entry door from closing. Thinking about it for a few moments, Bond gets an idea that the text sent to Mollaka might spell out the numbers to use on the keypad. Luckily, Bond's guess is right and he makes a hurried pursuit.

In order to distract security staff and remain unchallenged, Carlos activates the sprinkler system as a diversion, and walks out onto the runway. He commandeers a fuel truck and before heading off towards the Skyfleet S570prototype, attaches a small Explosive Keychain to the underside of the tanker. Bond pursues Carlos on foot, managing to run up some aircraft stairs and jumps on top of the tanker. Carlos tries to dislodge Bond by running the tanker into all sorts of aircraft vehicles, while he tries to get Carlos out of the cabin. As the tanker approaches the Skyfleet S570 prototype, Carlos jumps from the tanker leaving Bond to stop the tanker just before it hits the plane. After Bond is arrested by police, Carlos smugly activates his bomb's Phone Detonator. During the fight however, Bond had managed to remove the bomb from the tanker, placing it on Carlos' belt. He realises this too late when he is killed in the resulting explosion.

Bond eventually learns that Quantum was nothing more than a front run by Ernst Stavro Blofeld of SPECTRE, and that Carlos, along with Le Chiffre and Dimitrios, were all pawns as part of Blofeld's true plot to wreak psychological pain on Bond.

During the course of the 2008 video-game 007: Quantum of Solace, Bond opens up to Camille Montes about the death of his former love, recounting the events of Casino Royale. The player follows through the plot of Casino Royale, with Bond infiltrating the Science Center to kill Dimitrios and eventually saving Skyfleet from Carlos and an army of terrorists who have hijacked Miami International Airport. The level concludes with a pitched battle inside the S570's hangar. In an introductory cut-scene the character is identified as Carlos Decameron, an unemployed American electrical engineer and a suspected arsonist and weapons manufacturer.

Listed in the film's credits as simply 'Carlos', the character's (presumably fake) surname is 'Nikolic' according to his police uniform ID tag. The name may be an in-joke reference to set dressing department coordinator Marija Nikolic who notably worked in Casino Royale's Costume and Wardrobe Department.

Carlos realises Bond is following him.

Carlos attaches his explosive to one of the airport's fuel trucks.

Carlos about to detonate his explosive, unaware that it is on his belt. 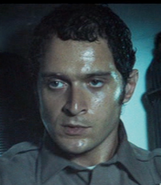