Carte Blanche is a James Bond novel written by Jeffery Deaver. Commissioned by Ian Fleming Publications, it was published in the United Kingdom by Hodder & Stoughton on 26 May 2011 and was released in the United States by Simon & Schuster on 14 June 2011. Carte Blanche is the thirty-seventh original James Bond novel and the first to have a contemporary setting since The Man with the Red Tattoo by Raymond Benson was published in 2002; as such, it does not share continuity with its predecessor, Devil May Care, which was set within the timeframe of Ian Fleming's original novels.

The title and cover artwork were unveiled on January 17, 2011, at a special launch event at the InterContinental Hotel in Dubai.

Carte Blanche updates James Bond's backstory to fit with the 21st century setting, making it the first ever true reboot of the literary James Bond series, to the extent of reimagining several major characters from the franchise (the John Gardner novels, though they were updated for the 1980s, avoided the issue of fully rebooting the Bond character). Jeffery Deaver has stated that his James Bond will have been born in 1979, making him a veteran of the war in Afghanistan (Operation Herrick), instead of a World War II veteran and Cold War secret agent as originally conceived by creator Ian Fleming. Among the changes, Q is from India, while Moneypenny is directly described as resembling the actress Kate Winslet.

Set in mid-2011, the story takes place over the course of a week. James Bond is a former Royal Naval Reserve officer who has recently joined the Overseas Development Group - a covert operational unit of British security under the control of the Foreign and Commonwealth Office tasked "to identify and eliminate threats to the country by extraordinary means." Bond is an agent with the 00 Section of O (Operations) Branch of the ODG.

He starts his assignment on the outskirts of Novi Sad in Serbia where an Irish sapper-turned-enforcer named Niall Dunne is planning to derail a train carrying three hundred kilograms of methyl isocyanate, dumping it into the Danube. Bond is able to prevent the catastrophe by derailing the train himself at a much safer place along the line. He is unable to detain Dunne, who kills Bond's Serbian contacts in the course of his escape.

Using what little intelligence Bond was able to gather from the operation in Serbia, the ODG is able to establish a connection to Green Way International, a waste disposal consortium contracted to demolish an army base in March. Because Bond is not authorized to act on British soil, he is forced to work with a domestic security agent named Percy Osborne-Smith. The two men clash over the interpretation of the intelligence, prompting Bond to manipulate Osborne-Smith into pursuing a lead Bond knows to be false, and allowing him to investigate the March army base on his own. While exploring the base hospital, he is sealed inside by Niall Dunne, who intends to kill him by bringing the hospital down in a controlled demolition. Bond escapes by improvising an explosive device.

Bond turns his attention to Green Way International, led by the enigmatic Severan Hydt. The Dutch-born Hydt is a "rag-and-bone man", who made his fortune in the disposal of waste. He has an intense fascination with death, which is strongly implied to be a sexual fetish. The Overseas Development Group authorize Bond to investigate Hydt when intelligence surfaces suggesting he is also known as 'Noah' and a key player in the derailment in Serbia, which is believed to be a prelude to a much bigger attack that will affect British interests. Bond gets wind of a second attack, to occur later in the week, killing up to one hundred people. He tracks Hydt to Dubai and with the help of CIA officer Felix Leiter, eavesdrops on a conversation with one of Hydt's senior researchers.

Concerned that the attack is imminent, Bond attempts to anticipate Hydt's next move and is on the verge of evacuating a crowded museum when he realizes that Hydt is there for an exhibit of the bodies of ninety tribal nomads who were killed a millennium ago. Aborting his planned evacuation, Bond returns to Hydt's facility to find that Leiter has been attacked by an unknown assailant and a local CIA asset has been murdered.

Hydt leaves Dubai for Cape Town, with Bond following closely. Once inside South Africa, he meets Bheka Jordaan, a local police operative. Bond is able to get close to Hydt by posing as a Durban-based mercenary, and fuels Hydt's fixation with death by promising him access to mass graves across the African continent. Hydt is taken by Bond's proposal of exhuming the bodies and recycling them into consumer products such as building materials, and gradually welcomes him into his inner circle. Bond attends a fundraiser for the International Organisation Against Hunger with Hydt, where he meets Felicity Willing, the charity's spokesperson. After helping Willing deliver the left-over food from the fundraiser to a distribution centre the two begin a relationship.

Using his cover, Bond is able to infiltrate Hydt's operations in South Africa. His relationship with Bheka Jordaan sours, particularly when he encounters the assailant who attacked Felix Leiter in Dubai: the brother of one of his contacts who was killed in Serbia. As the deadline for the attack - known as Gehenna (derived from the Hebrew word for Hell) - approaches, the Overseas Development Group is ordered to pull Bond out of South Africa and send him to Afghanistan as Whitehall believes the attack will happen there as they can see no connection between Hydt and Gehenna. M is not convinced and manages to keep Bond in South Africa, but the future of the agency depends on his being correct in suspecting Hydt.

On the day of the Gehenna attacks, Bond deduces that the target is somewhere in York, but his report is ignored by Osborne-Smith, who believes it is aimed at a security conference in London. Bond manages to access Hydt's research and development facility, where he uncovers plans for a weapon developed by Serbia known as "the Cutter", which fires razor-sharp shards of titanium at hypervelocity. Hydt has been using his operations to steal sensitive information, from which he has acquired the blueprints to the Cutter. Bond realized that the derailment in Serbia was a false flag operation: its intention was not to drop methyl isocyanate into the Danube, but to allow Niall Dunne the opportunity to steal scrap metal from the train for use in the prototype Cutter. Hydt was employed by an American pharmaceutical corporation to detonate a Cutter at a university in York, killing a cancer researcher on the verge of a breakthrough that would bankrupt the pharmaceutical corporation. Misinformation fed to a Hungarian newspaper would suggest the attack was aimed at a fellow lecturer who was a vocal opponent of the Serbian government. With the help of Hydt's personal assistant, Bond is able to stop the attack. Hydt is arrested, but Dunne escapes and shoots his employer at long range.

Bond is uncomfortable with the conclusion, feeling that there are too many loose ends at hand. Research shows that the ODG had been misled, and their intelligence misinterpreted; Severan Hydt was never known as Noah. Rather, it is an acronym for the National Organisation Against Hunger, which recently expanded to provide food aid on an international scale. Niall Dunne is an associate of Felicity Willing, whose organisation has expanded to the point where she directly controls one-third of all food aid arriving in Africa. She intends to use this power to strategically distribute food throughout east Africa, giving the Sudanese government a pretext to go to war with rebels and prevent Southern Sudan from seceding. Bond lures Willing into a trap at an abandoned inn where she confesses the plot. Niall Dunne re-appears, attacking the party before Bond and Bheka Jordaan shoot and kill him. Willing is taken to a black site after MI6 spread stories suggesting she was embezzling from her own charity.

A subplot throughout the novel involves Bond's investigations into a KGB operation code-named "Steel Cartridge". Bond believes that his father was a spy for the United Kingdom during the Cold War, and that he was killed by Russian agents. Further evidence suggests that Steel Cartridge was a clean-up operation, with the Russians assassinating their own agents that had infiltrated Western intelligence organisations. The suggestion that his father was a traitor does not sit well with Bond, until he unearths further evidence that shows the Russians carried out a Steel Cartridge assassination on a Western spy-hunter who was dangerously close to identifying Soviet moles - his mother, Monique Delacroix Bond.

Carte Blanche features several recurring characters from the Fleming novels, however, they all have updated backstories in order to fit in with the contemporary setting:

a US paperback edition 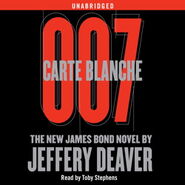