1930-1966
Cary Grant was a British-American actor known for his transatlantic accent and famous for acting in Notorious (1946), To Catch a Thief (1955), and North By Northwest (1959). He was one of the most famous men in Hollywood and classic cinematic history.

He started his acting career in the early 1930's then later became good friends with director Alfred Hitchcock, who was considered to direct the 007 film series but declined. Grant became a US Citizen in 1942 after several years staying in America. He retired from acting at the age of 62. Then Grant received five Golden Globe Award for Best Actor nominations in 1979. Grant had died in 1986 in Iowa.[1]

Bond producer Albert R. Broccoli was a close friend of Grant's and was the best man at his wedding. In the early 1960's when the Bond series was rolling around with their first film, Grant was the first person producers considered to play as the first James Bond because of his role as Roger Thornhill in Alfred Hitchcock's North By Northwest. Cary Grant had accepted the role, but he had wanted his contract to included only one film due to his old age of 58.[2] This caused producers to drop him and Sean Connery ultimately took the role as the first James Bond in 1962. 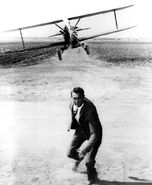 Cary Grant with Roger Moore. They have been known to be close friends.