The Casino Royale Strategy Game is a turn-based strategy, multiplayer, Adobe Flash browser game based on the then-upcoming 2006 James Bond film Casino Royale. Released in September 2006 to promote the film's November launch, the game was developed by Big Spaceship for Sony Pictures.[1] The game ceased operating circa April 2009 - February 2010.

Taking place prior to the events of Casino Royale, a would-be bomber (presumably Mollaka) is picking up a large sum of money for a terrorist attack at an airport exchange in Madagascar. An MI6 team commander leads seven poker-themed agents (Ace, King, two Queens, two Jacks, and a Joker) against a rival in a quest to find the cash-filled suitcase and/or eliminate the opposition before the enemy eliminates them.

As an MI6 team leader, the player's goal is to find the briefcase of terrorist funds before Le Chiffre's henchmen do, and escape from the airport. The game ends when one team retrieves the briefcase and escapes the airport, disables all members of the opposing team or if someone forfeits the game. The briefcase can be anywhere on the game board and can be seen when within the players' field of vision. They can use the surveillance room to view the location of their opponent's team as well as the briefcase. Once the case has been picked up, an icon that is visible to both participants can be seen above the briefcase carrier. The board will also scroll to the exit. This is their way out. If briefcase carrier is disabled, the case will drop to a nearby square.

Field of vision is represented on the game board as lit squares. Some objects can be seen over or around, while some may hide the player's opponent. Characters can only move to squares within their sight. The player's opponent can be on any square beyond their sight and may appear after completing a move. Opponents become visible briefly when they attack or use special abilities before slipping back out of sight.

Players move their characters by clicking the square they stand on or use the team display below the playing area. Selecting a character will display the character menu with "Move" (choose lit square to move to), "Attack" (choose lit square to direct your attack) and "Special" (choose lit square to direct your special ability) commands. Point cost for a given action is displayed on a lit square. Costs for attacks and special abilities will increase if used multiple times in a single turn. Players start the game with 15 action points and can save up to 20 points per turn. They are given 45 seconds for each turn. When the timer reaches zero or the player's action points for that turn are used up, their turn ends.

Each player has a team of five class characters named after playing cards - Ace, King, Queen, Jack and Joker. Each member of the player's team has unique attacks and abilities. Both the player and their opponent can only sustain so many attacks before health points are fully diminished. Once health has been reduced to zero, the character remains on the board for 3 turns during which it can be healed by their 'Queen' or coerced by an opponent to join the other team. If coerced, opponent gains control of character, but with slightly reduced capabilities. 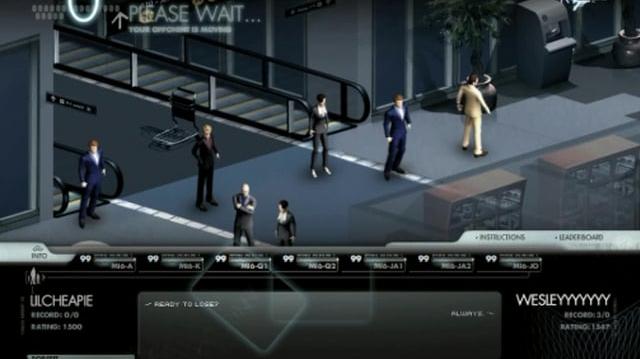 Casino Royale Strategy Game
Add a photo to this gallery

Retrieved from "https://jamesbond.fandom.com/wiki/Casino_Royale_Strategy_Game?oldid=74101"
Community content is available under CC-BY-SA unless otherwise noted.