Deceased; thrown through a clockface by Bond and landed on a piano

After the disappearance of a Moonraker spaceshuttle, James Bond is sent to California to investigate its owner Hugo Drax. While talking, they are then interrupted by Chang, who delivers tea. While drinking, Bond asks Drax about the Moonraker. Corinne Dufour then returns and Drax tells Bond that she will bring him to Dr. Holly Goodhead, who will show her around. After Bond and Dufour are gone, Drax tells Chang to make sure that some harm comes to Bond.

While showing Bond around, Bond and Goodhead arrive at the centrifuge chamber, in which astronauts are trained to endure the gravity force felt when travelling to space. She invites Bond to have a go and Bond accepts. After being strapping Bond into the chamber, Goodhead is visited by Chang, who tells her that Drax wants to speak her. As Goodhead leaves to phone Drax, Chang enters the control room and activates the centrifuge ; quickly accelerating it's G-Force to lethal level. When Bond presses the button signaling that he has enough, Chang ignores it. To save himself, Bond uses his wrist cannon to deactivate the control mechanism, causing the machine to stop. The return of Dr. Goodhead stops Chang from acting further and he leaves the control room, which Bond witnesses.

While staying at Drax's estate, Bond is caught investigating the billionaire's study by Dufour. She inadvertently reveals where the safe is located and stands by as Bond photographs the blueprints it contained. Dufour is seen by Chang as she leaves the study and the following morning Dufour is summoned by Drax while he is out hunting in the grounds. Informing her that her employment has been terminated, Drax orders Chang to set his trained hunting dogs onto her. The dogs chase her into the forest where she is eventually brought down and killed.

Bond follows a clue in the weapon blueprints to Venini Glass, a Venetian glass manufacturer acquired by Drax Industries. Here he discovers Drax's secret biological laboratory where a deadly toxin is being prepared. During his investigation he is confronted by Chang wielding a kendo stick. They continue their fight inside the museum, smashing many of the expensive vases and glasses. Eventually, Bond cuts Chang's stick to pieces with a glass sword he picked up. Realising that Bond is stronger, Chang flees into the upper parts of the building, hiding there and attacking Bond from behind. He attempts to strangle Bond with a chain but Bond escapes, eventually reaching the highest part of the building, the clock tower. There, Bond grabs Chang and throws him through the ornate glass of the clock's dial, causing him to fall to his death into a piano on the plaza below. Looking down at the corpse Bond delivers the line "Play it again, Sam." 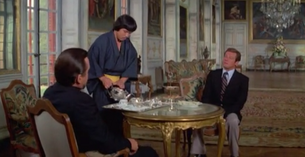 "Play it again, Sam."
Add a photo to this gallery

Retrieved from "https://jamesbond.fandom.com/wiki/Chang?oldid=100069"
Community content is available under CC-BY-SA unless otherwise noted.