Dr. Christmas Jones is a fictional nuclear physicist who appeared in the 1999 James Bond film The World is Not Enough. She was portrayed by American actress and former fashion model Denise Richards.

Mid-way though the film, Bond arrives at a Russian ICBM base in Kazakhstan, working undercover to investigate the terrorist Renard's presence at the facility. Posing as a Russian nuclear scientist, Bond is introduced to Dr. Christmas Jones, an American nuclear physicist working in Russia to dismantle nuclear warheads, reducing the Russian inventory in line with treaty obligations. On their initial encounter Jones treats Bond with a combination of mistrust and mild contempt, pre-empting a discussion of her unusual forename with a warning not to bother with any Christmas jokes - she has apparently heard them all.

After gaining access to the silo, Bond notices Renard removing a GPS locator card and a half quantity of weapons-grade plutonium from one of the nuclear devices. Before Bond can kill him, Christmas blows his cover by pointing to an inconsistency between Bond's appearance and his age as stated on his stolen ID card. Renard steals the bomb and flees, leaving everyone to die in the booby-trapped missile silo. Bond and Christmas narrowly escape the exploding silo with the weapon's locator card.

In Azerbaijan, Bond discovers that the stolen bomb has been placed in the King oil pipeline attached to an inspection rig and is heading rapidly toward the oil terminal. Bond and Christmas enter the pipeline to deactivate the bomb, and Christmas discovers that half of the plutonium is missing. They both jump clear of the rig and a large section of the pipe is destroyed by the remaining explosive charge. Bond and Jones are presumed killed and the villainess, Elektra King, decides to take advantage of the opportunity and abduct M.

Meeting up with Bond's ex-KGB ally, Valentin Zukovsky, the group goes to Istanbul, where they realize that Renard is planning to insert the stolen plutonium into a submarine's nuclear reactor (the submarine would subsequently be hijacked by Elektra and was captained by Zukovsky's nephew). The resulting nuclear explosion would destroy Istanbul, sabotaging the Russians' oil pipeline in the Bosphorus. Elektra's pipeline is planned to go around Istanbul, dramatically increasing the value of her own oil.

After a further assassination attempt by Elektra's hired thugs, Bond and Christmas are captured. Christmas is taken aboard the submarine, which was seized by Renard's men. Bond is taken to the tower, where Elektra tortures him with a garrotte. Bond escapes with the help of Zukovsky, frees M and kills Elektra. He then dives after the submerging submarine, boards it and frees Christmas. Following a fight, the submarine starts to dive, and hits the bottom of the Bosphorus, causing its hull to rupture. Bond catches up with Renard and fights and kills him. Bond and Christmas escape the submarine, leaving the flooded reactor to detonate safely underwater. They are subsequently shown celebrating Christmas in Turkey, culminating in a romantic liaison that is unintentionally spied on by MI6 using a new body sensor designed by R, who soon turns it off, lying to M by saying it is an error likely caused by a premature form of the "Millennium Bug" said to occur in 2000.

At the time of The World Is Not Enough's worldwide premiere on November 8th 1999[1], MGM signed a marketing partnership with MTV, primarily for American youths, who were assumed to have considered Bond as "an old-fashioned secret service agent". As a result, MTV broadcast more than 100 hours of Bond-related programmes immediately after the film was released, most being presented by Denise Richards. Observing MGM's marketing strategy, one commentator noted "what matters is that Richards has the magnetic power to attract those young American males that MGM is so eager to reach".[2]

Reception of the film and its casting choices were mixed. The film became the first in the Bond series to win a Golden Raspberry when Denise Richards was chosen as "Worst Supporting Actress" at the 1999 Razzie Awards. Richards and Brosnan were also nominated for "Worst Screen Couple".[3] Despite stating that she liked the role because it was "brainy", "athletic", and had "depth of character, in contrast to Bond girls from previous decades",[4] Richards was criticised as not being credible in the role of a nuclear scientist.[5][6] She was ranked as one of the worst Bond girls of all time by Entertainment Weekly in 2008.[7]

Christmas inside the Istanbul ex - KGB base.

Christmas trapped on the sinking submarine with Bond.

Christmas being seduced by Bond. 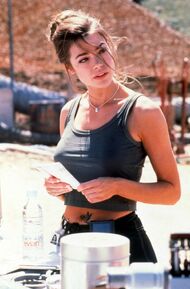 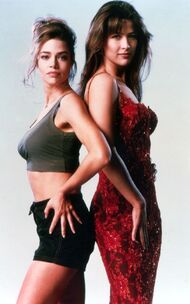 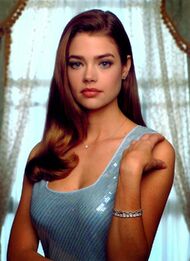 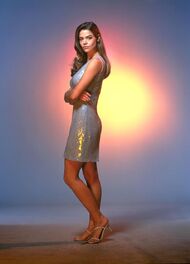 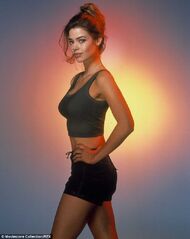