Sir Christopher Lee (May 27, 1922 - June 7, 2015) portrayed Francisco Scaramanga in The Man with the Golden Gun and GoldenEye: Rogue Agent. He was a close personal friend to Sir Roger Moore, whom he first met in 1948.

Christopher Lee was knighted in 2009. Although of aristocratic lineage and excellent education (amongst his classmates future Bond alumni Patrick McNee) he was impoverished by his step father's bankruptcy and forced to take a job as a shipping clerk. He would volunteer to fight the Soviets in Finland in 1939 but not see action in the campaign. His commander, Sir Ormonde Winter, known as 'O', was the former head of intelligence in Dublin Castle and has been suggested as one of the inspirations for 'M'. Lee was in the Home Guard and Royal Air Force during World War II, but despite proving a capable pilot he was forced to drop out of flying training on the verge of his first solo practice mission because of a problem his eyesight. He would be commissioned into RAF intelligence, working with the SAS, LRDG and SOE in North Africa and interrogating Nazi war criminals in Italy.

Lee was also a step cousin to Bond creator Ian Fleming, his friend and regular golfing partner. He even starred with pre-007 star Pierce Brosnan in the 1993 espionage film Detonator (A.K.A. Death Train). In 1978, Lee had been offered the role of Dr. Sam Loomis in the classic horror film Halloween, but declined the role because he did not think it worth it to travel all the way to the United States for filming. Fellow Hammer actor Peter Cushing also declined the role for the same reason, and the role of Dr. Loomis eventually went to fellow Bond villain actor Donald Pleasence.

Christopher Lee passed away on June 7, 2015 at Chelsea and Westminster Hospital in London at the age of 93 while due to the effect of heart failure and respiratory problems. The news of his passing was made public on June 11, 2015 with many reacting.

Roger Moore stated on Twitter on June 11: "It's terribly [sic] when you lose an old friend, and Christopher Lee was one of my oldest. We first met in 1948 ... Our thoughts are for Lady Lee, Christina and Juan." 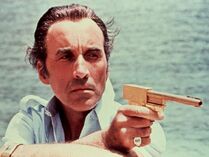 Appearing in The Man with the Golden Gun 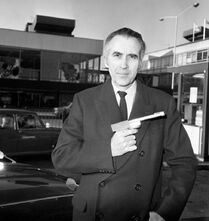 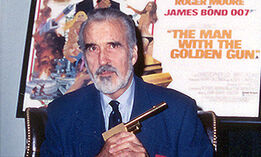 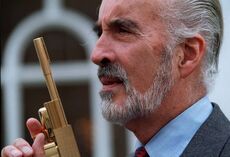 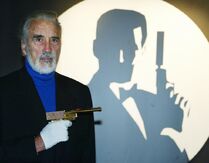 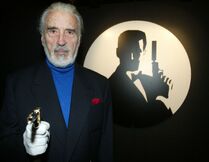 Retrieved from "https://jamesbond.fandom.com/wiki/Christopher_Lee?oldid=99176"
Community content is available under CC-BY-SA unless otherwise noted.