Ronald Walken, known by his actor name Christopher Walken is the Academy Award-winning actor who portrayed Max Zorin in A View to a Kill.

This article is a stub. You can help James Bond Wiki by expanding it.

Walken was born a New Yorker at the end of March 1943, during WWII. 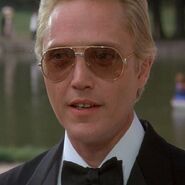 Christopher Walken, age 42.
Add a photo to this gallery
Retrieved from "https://jamesbond.fandom.com/wiki/Christopher_Walken?oldid=85761"
Community content is available under CC-BY-SA unless otherwise noted.