The Living Daylights (film)
Colonel Feyador is a fictional Soviet military commander in Afghanistan, an old acquaintance of the duplicitous General Koskov and a minor villain in the 1987 James Bond film The Living Daylights. He was portrayed by British actor John Bowe.

Colonel Feyador is commander of a Soviet airfield in Afghanistan. An old comrade of Soviet General Koskov, Feyador provides the General with a detachment of men and trucks to assist in his secretive State mission; in reality a private opium smuggling scheme. At Koskov's instigation, the Colonel has James Bond and Kara Milovy imprisoned, pending transport back to Russia for involvement in the (staged) assassination of General Pushkin and defection, respectively. When Kamran Shah and his Mujaheddin rebels attack the airbase, Feyador is killed when Shah throws a grenade under the petrol truck Feyador is sitting in, incinerating the Colonel. 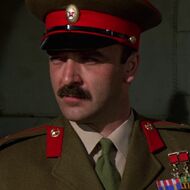 Retrieved from "https://jamesbond.fandom.com/wiki/Colonel_Feyador?oldid=88305"
Community content is available under CC-BY-SA unless otherwise noted.