Octopussy and The Living Daylights

Colonel Sun was the first continuation James Bond novel published after the 1964 death of Ian Fleming. Published in 1968 by Glidrose Productions, it was written by "Robert Markham", a pseudonym created by Glidrose for British novelist Kingsley Amis. Glidrose had intended publishing a series of James Bond novels written by different authors under the Robert Markham name, but Colonel Sun was the only novel published.

Discounting the two screenplay novelisations by Christopher Wood, and James Bond: The Authorised Biography of 007 (1973), by John Pearson, Colonel Sun was the last, new James Bond novel published until Licence Renewed, by John Gardner in 1981.

It is often claimed that Amis requested Colonel Sun not be filmed, however an introductory chapter to the Titan Books 2005 reprint of the Colonel Sun comic strip reveals that, quite the contrary, Amis approached EON Productions (home production company of the Bond film franchise) in 1976-77 with the idea of his novel being adapted as a future Bond film. According to Titan Books, however, Amis was told that Harry Saltzman (co-producer of the Bond series up until 1974) had "blackballed" any use of Colonel Sun as a Bond film, apparently in response to Glidrose having rejected the publication of the post-Fleming Bond novel, Per Fine Ounce, which Saltzman had championed.

Nonetheless, the novel may have inspired elements of several James Bond films, such as the Greek setting of For Your Eyes Only (1981), the kidnapping of M in The World Is Not Enough (1999). The name of the North Korean villain of Die Another Day (2002), Colonel Tan-Sun Moon, is acknowledged on the film's DVD release as having been a nod to Colonel Sun. However the most significant reference occurs in 2015's Spectre which directly adapted a torture sequence from the novel, resulting in a screen credit for Amis' estate.

Amis' identity as Robert Markham was never kept secret; the very first UK hardcover and US paperback editions (though not the Pan Books paperback) identify him on the cover, and several recent editions solely credit Amis with no mention of the Markham pseudonym.

The 1970 Pan Books paperback edition featured a photograph of a model portraying the titular villain; according to 007 Magazine, the model was actor Vincent Wong, who appeared in seven James Bond films in supporting roles, most notably as General Li in Die Another Day, a film that, as noted above, took some character inspiration from this novel.

Head of the British Secret Service, M, is violently kidnapped from home, but James Bond manages to escape the kidnappers who waited for his arrival. Following a lead to Greece, he deliberately walks into the trap set by the beautiful Ariadne Alexandrou, a Greek working for the Reds. The agents team up, with the Soviets worried about a forthcoming 'event'. Meanwhile, the British Head of Station disappears. Bond and Ariadne, who by now are lovers follow a lead to Vrakonisi, a small island off Greece where Chinese agent Colonel Sun Liang-Tan is holding M. Ariadne enlists an old friend, Niko Litsas who wishes revenge on former Nazi officer Von Richter for his World War II atrocities.

Litsas and Bond overpower a guard ship meant to prevent their reaching the island, where a Russian-led peace conference is taking place and Bond fears it will be attacked by the Chinese, with his and M's bodies left nearby so that everyone will presume they were responsible. Ariadne proves unable to convince Russian General Arenski of the plot, but he sets up a plan to lure Bond which 007 doesn't fall for. Bond then sees Sun and Von Richter setting up for their attack on the Russians from Sun's neighbouring house, where they deduce M is being held.

They attack by night but are captured. Sun then viciously tortures Bond in preparation for dumping his body, but one of his disgusted female helpers cuts Bond's bonds without the villain seeing. Bond stabs Sun and frees the others, killing Sun's henchmen and preventing von Richter from firing the mortar enough to hit the conference. Litsas finishes the German off, but Bond finds that Sun has survived the stabbing and now plans to come at Bond with a grenade. Bond reaches safety and finally stabs Sun through the heart.

Colonel Sun has the distinction of being the only non-Fleming James Bond novel adapted as a comic strip by the British newspaper, the Daily Express, and also syndicated worldwide. The strip ran from December 1, 1969 to August 20, 1970; adapted by Jim Lawrence with artwork by Yaroslav Horak. A notable difference between the novel and the strip is that the main villain, Colonel Sun, is an agent of S.P.E.C.T.R.E. in the strip.

Colonel Sun was reprinted by Titan Books in December 2005. Included in the collection, also titled Colonel Sun was River Of Death, an original James Bond strip published prior to Colonel Sun strip in 1969. 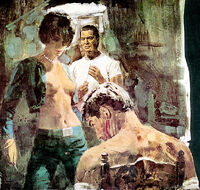 Bond is tortured by Sun. 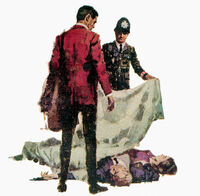 The Hammonds are murdered.

The ship goes up in flames. 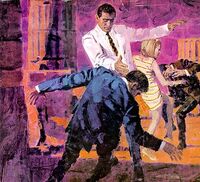 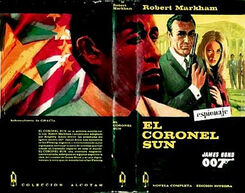