"Toro eh, sounds like a load of bull."
― James Bond to Bianca.[src]

In the pre-title sequence of Octopussy, James Bond is dispatched to destroy an enemy spy plane. Travelling under the guise of a horse trainer, Bond disguises himself as Colonel Toro (complete with a fake moustache, uniform and ID card) in order to access the facility. However, the real Toro notices 007 entering the aircraft hangar and blows his cover before he can complete his mission. Minutes later, Bianca spots Toro's paratrooper guards driving away with a captured Bond and helps free him. 007 attempts to escape in an Acrostar Bede Jet hidden in the back of his Land Rover's horse trailer and uses one of his enemies' own heat-seeking ground-to-air missiles to destroy the hangar with Toro inside.

Colonel Toro was portrayed by Kenneth Norris, who had previously doubled for actor Roger Moore in the ITC mystery spy thriller television series, The Saint, which aired in the United Kingdom between 1962 and 1969.[1][2] The actor was subsequently brought out of retirement by the filmmakers to portray the South American officer whom Moore's 007 impersonates.[2] 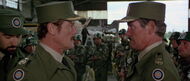 Retrieved from "https://jamesbond.fandom.com/wiki/Colonel_Toro?oldid=91053"
Community content is available under CC-BY-SA unless otherwise noted.