The Daimler Limousine (internally named 'DS420') is a luxury car specially designed for representation duties built by British manufacturer Daimler, closely related to Jaguar. The car has been used by several royal households, and is used for weddings, funerals, government officials or as a limousine operated by hotels.

The Living Daylights shows M leaving Blayden House for London in a black Daimler Limousine, which was built in 1986. The square indicators and chrome bumpers indicate a 1979-1986 model, but the licence plate C31DHV was issued in 1986.

M also uses a Daimler Limousine in Tomorrow Never Dies, when leaving the Ministry of Defence. The Daimler races through the streets of London, as a motorcycle escort provided by City of London Police clears the way. Other passengers on the Daimler, which is a 1987-1992 model (due to rubber bumpers), are James Bond, Charles Robinson and Miss Moneypenny. The car later re-appears when M visits the Ministry of Defence again.

Another 1987+ Daimler collects Bond and Vesper Lynd at the train station and takes them to Hotel Splendide. 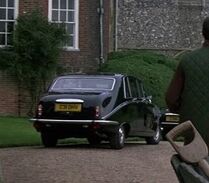 Rear view of the Daimler in 'The Living Daylights'. 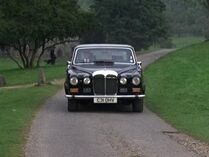 Front view of the Daimler in 'The Living Daylights'. 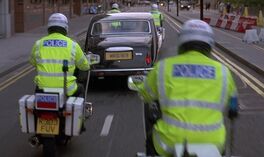 The Daimler escored by motorcycle officers in 'Tomorrow Never Dies'. 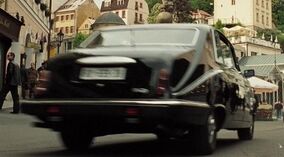 Rear view of the Daimler in 'Casino Royale'.

Another view in 'Casino Royale'. 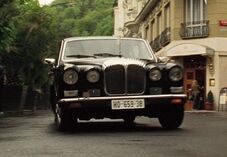 Front view in 'Casino Royale'.
Add a photo to this gallery

Retrieved from "https://jamesbond.fandom.com/wiki/Daimler_Limousine?oldid=82223"
Community content is available under CC-BY-SA unless otherwise noted.