The Decryptor is a modified personal digital assistant (PDA) and wireless hacking device developed by the British Secret Intelligence Service's (SIS/MI6) research and development division, Q-Branch. The device appeared in the 2002 video-game Nightfire.

The decryptor is a standard personal digital assistant (PDA), modified by Q into a custom wireless data unlocking device, powerful enough to overcome electronic locks and unlock high-security areas. The gadget effectively replaces the decryptor function of 007's phone in the game's 2001 predecessor, Agent Under Fire. Like many of the gadget models used in Nightfire, the device's appearance varies between PC and console versions of the game. In the PC version, when not in use the device is an unassuming 'MI6' branded PDA, however, it flips open to reveal an input keypad along with a five-digit red LCD display. In the console versions, the device is substantially less detailed, with a blue display and is always 'open' when used by the player. 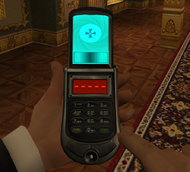 PDA with decryptor functionality active. As seen in the PC variant of Nightfire (2002). 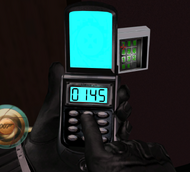 PDA with decryptor functionality active. As seen in the GameCube variant of Nightfire (2002).