Della Churchill was the fictional fiancée and wife of Drug Enforcement Administration (DEA) agent, Felix Leiter. She appeared in the 1989 James Bond film Licence to Kill and was played by actress Priscilla Barnes. The character is subsequently re-imagined in the 2012 video game 007 Legends.

During the pre-title sequence of Licence to Kill, Felix is on his way to marry Della when he unexpectedly learns that drug lord, Franz Sanchez, is in Florida. With the help of his Best Man, James Bond, Leiter pursues Sanchez and they return victorious. They parachute into the church and the wedding commences. At the reception, the bride and groom present 007 with a gift - an engraved cigarette lighter. Following the festivities she unintentionally references Bond's earlier short-lived marriage to Tracy Bond, unsettling him, and unintentionally foreshadowing her own fate. Leiter lifts her across the threshold of their bedroom only to be ambushed by two of Sanchez' henchmen. Their leader, Dario, steps out from behind the door and cudgels Leiter with his pistol. After killing Della in a manner suggestive of rape, the unconscious Felix is taken to a warehouse. Asking where is his wife, Dario mockingly informs him "We gave her a nice honeymoooooon..." Sanchez then lowers him into a shark tank. A visibly shaken Bond later finds Della, dead, on her bed, and soon swears to wreak havoc on the men responsible for her death and Felix's maiming.

In a re-imagining of Licence to Kill, Leiter transfers to the U.S. Drug Enforcement Agency (DEA) to assist them in dealing with the powerful drug cartels operating out of Mexico. During this time he and his wife Della are brutally attacked on their honeymoon night by Colombian drug lord, Franz Sanchez. Bond arrives to find one of the assailants still in the building, and pummels him, before discovering Della's corpse lying on the bed. Nearby, Leiter is drifting in-and-out of consciousness, having been savagely beaten and wounded on his right side.[1]

In the 2020 anthology comic book published by Dynamite Entertainment, Della is mentioned by Leiter as his late wife and briefly appears in flashbacks. In this timeline, she lived long enough to mother two daughters, Cedar and Kelsey. Leiter divulged to Bond that after her death, his relationship with his daughters deteriorated. Her cause of death, however, was not disclosed.

The script – initially called Licence Revoked – was written with actor Timothy Dalton's characterisation of James Bond in mind,[2] and the obsession with which Bond pursues Sanchez on behalf of Leiter and his dead wife is seen as being because "of his own brutally cut-short marriage"[3] to Tracy in On Her Majesty's Secret Service. Bond's marriage was even mentioned in the film. 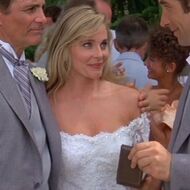 Retrieved from "https://jamesbond.fandom.com/wiki/Della_Churchill?oldid=97123"
Community content is available under CC-BY-SA unless otherwise noted.