Denise is a fictional high-ranking member of Pussy Galore's Flying Circus, a female aviator team led by Pussy Galore under the employ of the infamous businessman, Auric Goldfinger. The character appeared in the 1964 James Bond film Goldfinger and was portrayed by British actress Aleta Morrison.

Denise and the others members of Pussy Galore's Flying Circus are involved in Auric Goldfinger's "Operation Grand Slam" consists to infiltrate Fort Knox, being in charge to dispensing the Delta 9 nerve gas across the aera of the bank in order to kill 60,000 people. So, Goldfinger and his task force (led by Oddjob and Kisch) to smuggle an atomic bomb (created by Mr. Ling) into the vault. Such an action would make the gold radioactive and useless for 58 years, and that the value of Goldfinger's gold will increase many times, thus making Goldfinger the richest man in the world.

Upon the arrival of James Bond (as he was invited to personally witness the preparations of the operation after being captured by Goldfinger), Denise is seen landing her plane before greeting Galore, who assures her and the other pilots that they will get their assignments tomorrow night. She then dismisses them for the day before transporting Bond to Goldfinger's ranch, where the secret agent learns of Goldfinger's plot. With that in mind, Bond seduces Galore into foiling Goldfinger's plan, so she has Denise and the pilots to replace the nerve gas with a harmless one while alerting the U.S. government about Goldfinger's plan. It is unknown what happens to Denise and the other pilots following the deaths of Goldfinger and his men.

In the script, when we first meet her her name is listed as Althea but later on it says Denise. Either this was a mistake or the two were mashed into one. 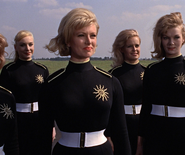 Denise with her crew.
Add a photo to this gallery

Retrieved from "https://jamesbond.fandom.com/wiki/Denise?oldid=100918"
Community content is available under CC-BY-SA unless otherwise noted.