Derek Meddings was the miniature model and Special effects team leader for a lot of the James Bond movies and created many of the amazing models and filming the explosions in the seen in various films. He previously worked on the hugely successful Gerry Anderson puppet shows e.g. Thunderbirds before working on the Bond films.

Derek Meddings was born in St Pancras, London, England. Both Meddings' parents had worked in the British film industry.

At the time of his death from colorectal cancer in 1995, Meddings was engaged in post-production on his final Bond film Goldeneye on which his sons Mark and Elliott, James (born May 1973) also worked. A dedication in the credits of the completed film reads "To the memory of Derek Meddings". 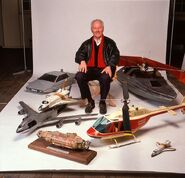 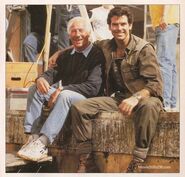 Behind the scenes of Goldeneye

Goldeneye behind the scenes 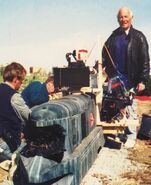 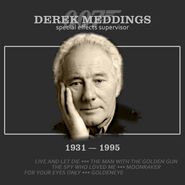 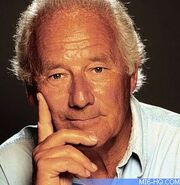 Miniature model of Scaramanga's base. 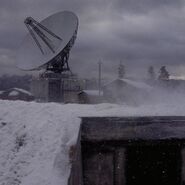 GoldenEye sateillite miniature model
Add a photo to this gallery
Retrieved from "https://jamesbond.fandom.com/wiki/Derek_Meddings?oldid=76533"
Community content is available under CC-BY-SA unless otherwise noted.