Deceased, stabbed in back

Dikko Henderson was a fictional veteran British intelligence operative living in Japan. The character appeared in the 1967 James Bond film You Only Live Twice, portrayed by British actor Charles Gray, who later went on to play the role of Ernst Stavro Blofeld in 1971's Diamonds Are Forever. Henderson was loosely based on the literary character who first appeared in Ian Fleming's 1964 novel of the same name.

Arriving in Tokyo, James Bond is taken to the estate of British citizen Dikko Henderson, who had lived in the nation for 28 years. Henderson makes notes of a Japanese agent named Tiger Tanaka and of the spacecraft landing in Japan and suggests that someone there may be behind it, but is killed (stabbed in the back by an assassin) before saying anything further. Bond takes down one of the assassins and takes on his guise to ride with another associate unknowingly to Osato Chemicals and Engineering.

Henderson's apartment in Tokyo is an odd hybrid of old English comfort and Japanese style. "Awfully fond of some of these old things...," he almost apologises to Bond about the clash of styles. He gave Bond a Vesper martini though it was stirred, not shaken. It is implied that Henderson served in the British Army during the Second World War, where he lost his right leg in Singapore in 1942. 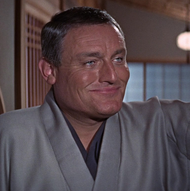 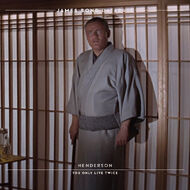 Add a photo to this gallery
Retrieved from "https://jamesbond.fandom.com/wiki/Dikko_Henderson_(Charles_Gray)?oldid=80208"
Community content is available under CC-BY-SA unless otherwise noted.