Dominique was a fictional French performer in the Tour Eiffel Restaurant. A minor character credited simply as "whistling girl", she appeared in the 1985 James Bond film A View to a Kill and was portrayed by British actress and pinup girl, Carole Ashby. She was also an optional character in the 1983-87 tabletop role-playing game James Bond 007.

Dominique was a whistle performer in a routine called "Dominique and the Enchanted Papillons" (Butterflies). As she whistles a mournful tune, butterflies flutter around her; controlled by means of a fishing pole held by a man in a black outfit, who is standing in the rafters. She performs in the Tour Eiffel Restaurant while James Bond and French detective Achille Aubergine dine and discuss the suspicious activities of industrialist Max Zorin. Shortly into the show, her co-performer is attacked by a masked assassin, who murders the detective using a poison-barbed butterfly prop. As he collapses dead, into his soup, she screams.

While not essential to the A View to a Kill module story, the gamemaster can choose to introduce a stage show "involving an attractive young lady who does a sort of pantomime with butterflies",[1] as misdirection. By introducing the act, the players will be unsure whether Aubergene will be killed by the act or by some other means. Notably, unlike the film, the detective is killed by his poisoned soupe au pistou.[1]

While credited simply as "whistling girl", the character is given the name "Dominique" on-screen and in provided subtitles. Interestingly, the Compere who introduces the act is performed by illusionist Dominique Risbourg, who appears to have lent his name to the female performer.[2] Director John Glen recounts how he saw the butterfly routine several years prior, while in Paris with his son.[3] He raised the idea to producer Albert R. Broccoli, whose daughter Barbara eventually found Risbourg performing in Las Vegas.[3] The filmmakers made arrangements with him to meet on his return to France, and while scouting during pre-production of A View to a Kill, they visited Risbourg's restaurant outside Paris to see the butterfly show.[2] Although performed in sub-par conditions outside, he was asked to recreate the act for the film.[3] Filming of the Tour Eiffel Restaurant scene took place in a set designed by Production Designer Peter Lamont at Pinewood Studios, England.[2] Carole Ashby later recounted how, during filming the scene, a vigorous row broke out backstage between the butterfly operators; Risbourg and his wife. Her performance affected, Ashby's whistling was subsequently dubbed in post-production.[4] 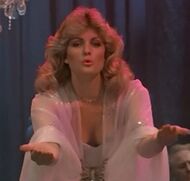 Retrieved from "https://jamesbond.fandom.com/wiki/Dominique_(Carole_Ashby)?oldid=88775"
Community content is available under CC-BY-SA unless otherwise noted.