Dominique Derval, known simply by her nickname Domino, is the mistress of SPECTRE operative, Emilio Largo in the 1965 James Bond film film, Thunderball. She was portrayed by the late French actress Claudine Auger and was dubbed by Nikki van der Zyl. The character was based upon Dominetta Vitali in the Ian Fleming novel, Thunderball.

James Bond first heard about Domino during a briefing from M to all the double-0 agents in Europe. Bond had recognized her brother from a photograph, having seen him dead the night before at the Shrublands health clinic, and requests that he be allowed to investigate this potential lead as opposed to his original assignment.

Domino is seen when Bond is swimming in Nassau, her foot gets stuck in a form of ocean floor but Bond sets her free. She swims up to her boat and thanks Bond. Bond swims back to his boat with his Nassau contact, Paula Caplan. Paula takes care of their boat as Bond is about to learn more about Domino. Domino and Bond have lunch on the beach. But Quist spies on the two. A sign that Domino had to go back to the Disco Volante.

At the hotel Bond stayed in, Bond sees Domino with Largo, Domino was smoking a cigar, as Bond bid in the game against Largo. Domino tells Largo that Bond pressed her to a drink. Domino and Bond slow-dance outside but Largo collects her. At Largo's home, Palmyra, Domino is swimming when Bond visits. She leaves Bond with Largo to go make lunch. Largo invites Bond to the Nassau Junkanoo.

After attending the Junkanoo with Bond, Domino tells Bond that Felix Leiter is trying to contact him. He leaves Felix with Domino, to go and search for Paula, who had been kidnapped by Fiona Volpe. It turns out Paula committed suicide by swallowing cyanide. Domino sees Bond in the water the next day, they go on shore and Bond tells the rather misunderstood Domino the entire predicament that her brother was killed by Largo and Largo plans to make a nuclear holocaust with the bombs SPECTRE gave him. She helps Bond kill Vargas and spies on board the Disco Volante but is caught and tortured by Largo.

After being released by a repentant Kutze, she proceeds up to the ship's bridge to find Largo holding Bond at gunpoint. As he prepares to pull the trigger Domino shoots him in the back with a harpoon. He turns and collapses dead on the ship's wheel, jamming the controls. Unable to move the body and with seconds to spare, Bond, Domino and Kutze leap overboard as the Disco Volante runs aground and explodes violently. The two are subsequently saved by the CIA and are carried off into the air by a sky hook.

Domino Derval was an impeccable French beauty and embodied all that James Bond found irresistible in a woman: She was intelligent, imaginative, humorous, sexually aggressive and courageous. Until she met 007, Domino was resigned to Mistress being Emilio Largo's ghost Mastermind. On the one hand, they got used to the opulent lifestyle Largo offered him. However, the dark side of this deal, they would only be able to get out of the golden cage in which he held captive.

Their freedom was limited. It was observed - if not Largo yourself, his many henchmen. She spent her precious free time alone, went to the beautiful waters of her Nassau passion to swim after and lived with Largo on her investment Palmyra. More than extravagant attires, to the frigid Largo offered him, expected Domino, however, true love. The wish was fulfilled by their later relationship with James Bond. Domino's deferred courage manifests itself when she risked her life to help Bond to stop Largo's nuclear threat in the United States. 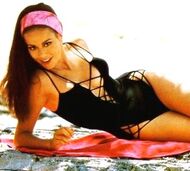 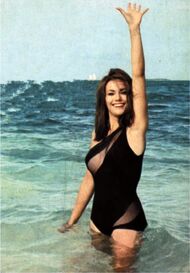 Retrieved from "https://jamesbond.fandom.com/wiki/Domino_(Claudine_Auger)?oldid=100210"
Community content is available under CC-BY-SA unless otherwise noted.