In the unofficial film Never Say Never Again, Domino Petachi is structured after Domino Derval, this time however, she is played by Kim Basinger. The character is still called Domino (however now it is no longer just a nickname) yet her last name has become Petachi, the reason for this change is unknown. Although somewhat less assertive than the Thunderball version- being clearly terrified when she is nearly sold off to a group of Arabs-, she nevertheless kills Largo and avenges her brother. The film ends with Bond retiring from the service to be with her.

Never Say Never Again marked the high-point of a long legal battle between United Artists and Kevin McClory. For more information see: the controversy over Thunderball. 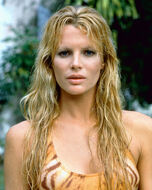 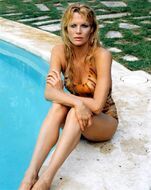 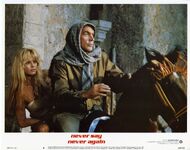 As they dance, Bond informs Domino that her brother had been killed on Largo's orders. 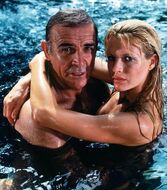 Domino swimming underwater.
Add a photo to this gallery

Retrieved from "https://jamesbond.fandom.com/wiki/Domino_Petachi_(Kim_Basinger)?oldid=85491"
Community content is available under CC-BY-SA unless otherwise noted.