Dorian Reid is a fictional ex-IRA bomber and rogue SIS informant who appeared in the 2015 video-game James Bond: World of Espionage, during its Dead Again Tomorrow story-line.

A former IRA bomber, Dorian Reid became an informant for the Secret Intelligence Service in 1993 after a bomb he had planted in a Belfast fish shop detonated prematurely, causing him to lose an arm in the process. The IRA pinned the blame on him, resulting in his cooperation with SIS, whose Q Branch built him a new prototype limb in exchange for valuable intelligence. The limb in question was derived from CANDU reactor maintenance technology, the hand is as capable of lighting a match as it is moving control rods in a nuclear furnace. Since that time, Reid went rogue and was last seen ransacking a medical supply facility on the western outskirts of Baghdad, Iraq. Bond was sent to extract him for debriefing after forensic analysis linked explosives he had used in Afghanistan to Dr. Julius No.

After investigating Reid's activities in Iraq it becomes clear that he plans to detonate a dirty bomb or radiological dispersal device (RDD), spreading a radioactive cloud across Baghdad and leaving Iraq uninhabitable for centuries. Kidnapping Bond's newfound ally Fatima Blunt, Reid ties her to the dirty bomb in the hope of luring the British agent into a trap. Once there, he reveals that his goal is the dissolution of British power by framing 007 and MI6 for the bombing. Reid is killed in the ensuing firefight, however Angolan conflict diamonds found in his pocket lead Bond to his paymaster in Las Vegas, Ruby Cox. 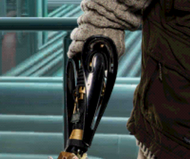 Retrieved from "https://jamesbond.fandom.com/wiki/Dorian_Reid?oldid=71958"
Community content is available under CC-BY-SA unless otherwise noted.